LEGO Legends of Chima Wiki
Register
Don't have an account?
Sign In
Advertisement
in: Out of date articles, Characters, Leaders,
and 12 more
English

Worriz is the leader of the Wolf Tribe and was a secondary antagonist in the first season. He is later a hero, and saves Chima, along with Laval, Cragger, Eris, and more. He is included in sets 70011 Eagles' Castle and 70009 Worriz's Combat Lair. Later appearances include the 70127 Wolf Legend beast and 70145 Maula's Ice Mammoth Stomper.

Wolves are pack animals who live in such close quarters that they share a kind of hive mind. Group decisions are usually arrived at easily and unanimously, so there is no real need for leaders. However, the wolves' transitory nature and traveling battle caravans often bring them into contact (and conflict) with other creatures, so someone in the tribe has to handle negotiations with "the others" (as all non-wolves are known). Worriz was given this role because he was considered "the most personable." In reality, he is a vicious, ruthless backstabber. His only saving grace is that he is able to disguise his true nature long enough to fool the other creatures. He can even occasionally fake a bit of "charm" when needed. He is the closest thing the merciless wolves have to a "statesman," but that's not saying much.

Although wolf packs don’t normally have leaders, Worriz has held a position of power in his tribe for a long time because it’s believed he is the best at negotiating with other tribes. He was never very happy about having to answer to Cragger during the fight over CHI, and he still isn’t comfortable with Laval and his other new “allies” on the quest for the Fire Wings. But he understands that the Icehunters are even more vicious and nasty than he is, so they have to be stopped. For now, Worriz and the Wolves will play nice with others.

Worriz appears alongside the other heroes from the eight main tribes in the first episode of the series, "The Legend of Chima." Here, he is seen playing hide-and-seek with the other young heroes. He is forced out of hiding by Skinnet's stench, expressing his dismay due to being very sensitive to smell. He later states that he would prefer a fun game of "hide-and-attack" and discusses plugging Chi with Cragger.

Worriz is driving a Pack Tracker and commands Wilhurt to ¨Bring Them Down!¨ 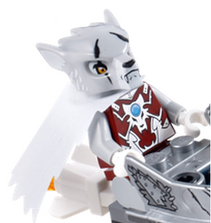 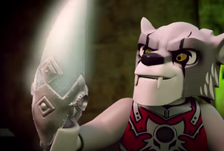 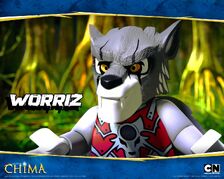 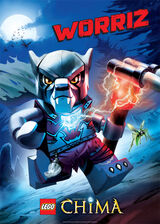 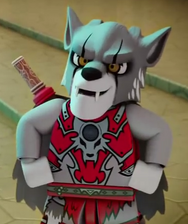 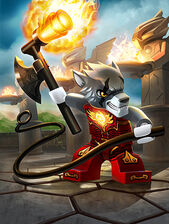 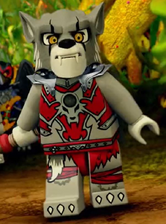