Jeff Evans Todd
Winzar is a fearless warrior of the Wolf Tribe. He is a powerful warrior and power addition to the wolf tribe.

Winzar doesn't know the word "fear". Really, he has no clue what it means. Strong, fast, and cunning, he'll be the first over the top of the hill, attacking enemies. The mere sight of him loping over the terrain is enough to scatter lesser foes. But his aggression comes with a price... he's battle-scarred from top to bottom, with a nasty set of clawmarks disfiguring his face. Don't bother asking him how he got the wounds... he'll be only too happy to demonstrate.

Not much is known of Winzar's past, all that is known is that he was a warrior for the wolf tribe during the Civil War, however, not much was seen of him during the TV show afterwards. It is, however, obvious that he is good with speedorz, and is occasionally seen driving one. Not to mention he came in a Speedorz LEGO set.

Winzar is a light grey muscular wolf. He has a large mound of deeper colored fur on his upper chest and a badly scarred head. He seems to have a sort of beard on his snout as well.

Winzar wears hardly any clothes. Only a plain crimson, slightly revealing, loincloth. Other than this, he has nothing on. 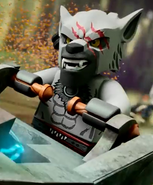 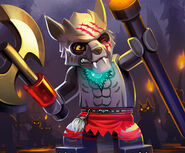