70009 Worriz's Combat Lair
Windra is a female warrior and pilot of the Wolf Tribe. Worriz has a crush on her, but she clearly doesn't like him back.

Windra was the first wolf affected by the last hundred year moon phenomenon, having it control her three nights before its full effect. ("The Hundred Year Moon")

Windra was present when Crooler came to the wolves offering to destroy the pledge of the pack in exchange for helping her steal the CHI. During the race, Windra became part of the mob that fought outside the lion temple. She later piloted the Wolf Copter to where Worriz was battling Cragger and Laval and provided him with an escape route. Cragger, however, grabbed on as the flying vehicle took off and Windra was forced to stomp on his hand until he fell. ("Foxtrot")

While the wolves were at large, Windra served as a scout to monitor the lion's activities and was on duty when they repaired their wall using ShadoWind's orb of Golden CHI. The next day she was part of the ambush party that attacked the lions while transporting the bear's CHI. When they switched to using the eagle jets, Windra engaged Eris in an epic aerial battle around the Grand Archway to which the wolf crashed. ("The CHI Jackers")

Windra accompanied the rest of the army Laval assembled to fight the hunters in the Crocodile Swamp. During the battle, Windra tripped Sir Fangar, causing him to swallow an orb of CHI. ("Attack of the Ice Clan")

About midway into the battle against the Ice Hunters, the phoenix sent the Legend Beasts to protect the tribes. Windra was present at the wolf camp when the Wolf Legend arrived and celebrated its return by howling with the other wolves. ("Cool and Collected") 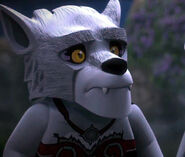 Windra is seen at the Marketplace using a Bellow Plant and being carried away.