LEGO Legends of Chima Wiki
Register
Don't have an account?
Sign In
Advertisement
in: NPCs, Wolf Tribe, Wolves,
and 4 more

70013 Equila's Ultra Striker
Wilhurt is a berserk warrior of the Wolf Tribe, known for being ruthless and having a strong desire for hurting. He is Worriz's right hand man, tasked with accompanying him on missions.

Wilhurt has black fur throughout his entire body, distinguishing him from the rest of the pack. His paws are dark grey, with some dark grey fur defining his muscular torso, knees and nose. He wears a CHI medallion from a cord around his neck, to power up with CHI. Wilhurt has white fangs and claws on his feet. He wears a red piece of clothing over his waist, with a small silver wolf logo and fangs covering his belt (trophies from past victories). His eyes are orange and usually fixed in a menacing glance. In the show, the fur covering Wilhurt's eyes is white, however it is dark grey in minifigure form. Wilhurt also wears a white cape in the show, but this cape is absent in minifigure form. (If you discount the "cape" on his printing.)

Just imagine Worriz, but without ANY redeeming qualities. Wilhurt has only two ambitions: to hunt and to fight. When he is not doing either of them, he goes a little crazy. It's best to keep him occupied. If he spends too long without hurting someone, he gets REALLY dangerous.

It's right there in the name - this crazed guy will hurt anyone who crosses his path! Wilhurt's job is to help Worriz - but his passion is attacking anything and everything that moves. To keep him from going completely berserk, it's best to keep him occupied.

Wilhurt is just as crazy on wheels as he is on his paws! On his maniacal motorcycle, Wilhurt chases down enemies with terrifying speed - look out for those mighty tires approaching!

Looking at Wilhurt's fang-covered belt, menacing smile and seriously scary eyes, you might get the impression he's up to no good. You would be right! For Wilhurt, any moment not spent causing havoc is a moment wasted.

If Wilhurt goes too long without hurting someone, he starts to really lose control! It's best to keep away when he's in one of those moods.

In Legends of Chima Online

Wilhurt is the boss of the third dungeon. He is very strong and spawns with a pack of wolves. Wilhurt drops around 1,000 studs and items worth more than 100,000 studs. Once you defeat him, you discover that he was being controlled by the Crocs' flowers. Wilhurt can also be found in the cavern in Elder's Pride, for the Cry Wolf quest, where he is guarding a Tear of Cavora.

Wilhurt guards the second Tear of Cavora. He is accompanied by a Wolf Medic and a high-level Wolf guard. The path to the tear is cut off by a bridge that must be lowered with a pressure plate. Enemy wolves will continue to spawn the entire time.

Activating the pressure plate without some serious defense can be difficult, so it is best to either eliminate Wilhurt and his wolves first, or to CHI-up and activate the switch while invincible.

Defeating Wilhurt is equally as difficult as activating the switch, as enemy wolves will continue to spawn the entire time, though the number of wolves that spawn can be reduced by destroying the surrounding wolf tents. The tent to the west and north will both crumble in one hit, cutting off some reinforcements, but the eastern and northwestern tents have a lot more HP and will take plenty of hits before breaking.

After the tents have been destroyed, the only new enemies that will spawn are pairs of wolf grunts armed with blasters, leaving you mostly free to attack Wilhurt.

Wilhurt is a melee-only boss and will chase you down and attack you at close range. He doesn't deal too much damage per hit but has a lot of HP.

Wilhurt's guards include a Blaster-Medic and a unique dual-wielding guard.

Among wolves that can spawn from the tents are melee-wolf grunts and dual-wielding melee wolf grunts.

Wilhurt makes a non-speaking cameo with Worriz using the Alpha Cannon on the Pack Tracker. 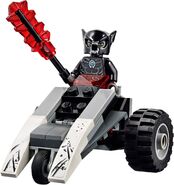 Wilhurt on a Claw Bike 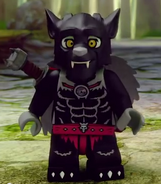 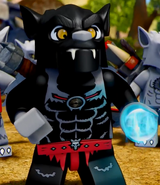 Wilhurt and Winzar on Speedorz