LEGO Legends of Chima Wiki
Register
Don't have an account?
Sign In
Advertisement
in: Vultures, Ice Hunter, Villains,
and 4 more

70135 Cragger's Fire Striker
Vornon is a member of the Vulture Tribe, who appeared as a minifigure in summer of 2014.

Vornon looks at the world as if it were a huge rock about to fall on his head. He always expects the worst, and even when things are going well, he figures something bad will happen before it’s all over. All of this makes it strange that his best friend is VoomVoom, who sees the bright side in every situation. Although he’s a top Vulture Jet pilot with a lot of victories on his record, he expects that the next battle will bring defeat. Even if it doesn’t, he assumes that a victory will lead to some other terrible consequence 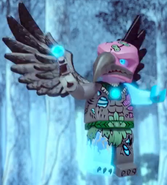