Vardy is the Leader of the Vulture Tribe, and appeared as a minifigure in the summer of 2014.

If there’s one word to describe Vardy, leader of the Vulture Tribe, it’s “patient.” He will set a trap and then wait for days for his target to walk into it. Like most Vultures, Vardy is in no rush. He’s happy to keep busy whistling, playing word games and making origami until it’s time to crush an enemy. This patience is his greatest strength, but it drives Sir Fangar crazy, since the Saber Tooth is in a hurry to take over the land of Chima. But Fangar also knows not to underestimate Vardy, who can be as cruel as any other Ice Hunter.

At some point in Chima's ancient past, Vardy rose to become leader of the Vulture Tribe. The Mother Sun, taking pity on the squalor and lack of knowledge that plagued the four tribes, sent her children, the Phoenix Tribe, to educate the beings below, including Vardy.

However, Vardy quickly became corrupted and power-hungry, and falling under the support of the powerful Sir Fangar, made an alliance with Maula and Icebite to lead their tribes against the Phoenix in a bid for greater power.

Despite his role in masterminding a largely successful assault on his teachers, Vardy's attempts would soon lead to catastrophe as the Phoenix, seeking to quell the discontent and hunger of the primitive tribes, gathered the nine Fire Harnesses to perform a Great Illumination. However, Fluminox, terrified of the thought of leaving his son Flinx as an orphan, refused to participate, thus leading to a failed Illumination. As a result, the peak of Mount Cavora was instead torn off, floating in the sky as the cataclysmic shift in the earth caused the area near the Outlands and the Fangs to recede, taking Vardy and the rest of the Hunter Tribes down with it and forming the Gorge of Eternal Depth. As a result of the failed Illumination sucking out all life, heat, and energy from the area, Vardy was sent into a dreamless-sleep as most of his body froze over, now encased in a massive underground glacier.

Attack of the Ice Clan

Eventually, Vardy's dreamless sleep would be shattered when Fangar, having been awoken by the power of Scorm's discarded Chi, used the rest of the Scorpion King's orbs to empower his comrade, awakening Vardy through a constant surge of energy coming from the orb now in his harness. Regrouping with the rest of his similarly-awakened comrades, Vardy would agree on Fangar's decision to keep Icebite and his tribe frozen, having grown wary of the tribe's furious and unrestrained fighting, and re-power their frozen vehicles. Flying out of the Gorge of Eternal Depth, Vardy helped lead the Hunter Tribes to victory against Scorm's scattered and defeated Outland Tribes, before moving on to Chima and the Crocodile Swamp.

Arriving at the foot of the Croc Swamp Hideout, Vardy helped lead his tribe to a powerful and decisive victory against the Crocodile Tribe, freezing them solid. In response to the invasion, the tribes of Chima would lead an assault in an attempt to defeat the threat, with Vardy participating in personal combat with Cragger. Easily freezing the prince's tail, Vardy, becoming apathetic to the fight and savoring Cragger's impending fate, would mock the Crocodile by enjoying a crossword in front of his face, only to be attacked and knocked out by Laval.

An almost apathetic and lax strategist, Vardy is reputable for his insistence on patience as the key to victory, and, like all other Vultures, applied this to his life so greatly that he would often procrastinate on tasks in favor of selecting the perfect moment to perform them. As a result of his cool-headed and careful strategy coming into conflict with Fangar's hot-headed and rash attacks, he would often incite the anger of the Saber-Tooth, although nevertheless maintained a good friendship nevertheless.

Despite being seemingly indifferent to everything around him, Vardy is nevertheless a capable strategist and combatant. Being a foil to Fangar, Vardy is constantly relaxed and seemingly unable to let emotion claim him, even going so far as to have enough composure as to perform menial hobbies such as crosswords and other mental puzzles. However, he does have a sense of flair and fashion, being particularly passionate about organizing Fangar's wedding and showing some sense of formality and taste.

Despite his affable nature, however, Vardy does have a dark side; like the rest of the Ice Hunters, his education by the Phoenix left him with a ravenous hunger for power and knowledge, enough to motivate him to turn on the very people who enlightened him in a fit of power lust. Likewise, he was also somewhat bitter, as indicated by Fangar, over his grotesque, zombified condition, which he blamed on Fluminox. Later, as a result of the Great Illumination, Vardy's dark desires would be sated and quenched, rehabilitating the Vulture and allowing him to fit in with society as a benevolent ruler. 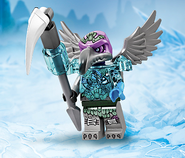 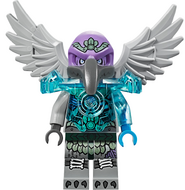 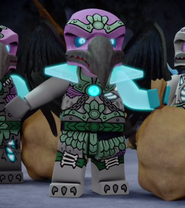 Vardy is planning a wedding. 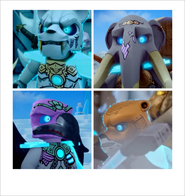