The Thieves' Code is a brown book, containing a set of rules pertaining to the ethics of thieves. The book itself is quite thick and old, with a brown cover and red inscriptions on the it. It has a latch on the side that keeps the book closed. It was introduced in the television series, in the episode Foxtrot, where Razar is seen to be the owner of a copy. Razar explains how The Thieves' Code prohibits Ravens and other thieves from stealing from one another.

The age of the Thieves' Code is unknown, however it is portrayed to appear quite old. This has been one of the only instances in which the Ravens are depicted to follow a set of morals.

In Foxtrot, the people of Chima begin to fight over the sly actions of Furty. Razar and Razcal stand by Razar's Speedorz, where Razar reassures Razcal that they are safe from their items being stolen, as the Thieves' Code protects them from stealing from each other. Moments later, the Thieves' Code itself is ironically stolen by Furty, causing panic between the 2 Ravens. 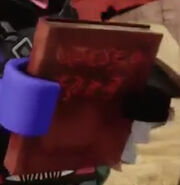 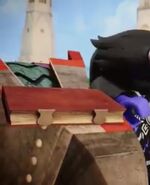 Sideview of the Thieves' Code