70222 Tormak's Shadow Blazer
Sykor is part of the Saber-Tooth Tiger Tribe. He is always kept on a leash by Strainor.

Sykor is the most feared of all the Saber Tooth warriors because he will do almost anything at any time. Frenzied and impossible to control, Sykor is actually kept on a leash held by Strainor but is always threatening to break free.

Sykor just wants to attack, and he doesn’t really care who. He is just as likely to go after members of his own tribe as the enemy. No one has ever had a conversation with this saber tooth, because he doesn’t speak, only growls. 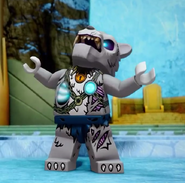 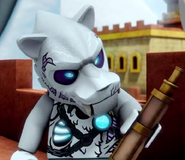