Queen of the Spider Tribe

Spinlyn is the Queen of the Spider Tribe. She was trapped in This May Sting a Bit, but was freed from the ice in A Very Slippery Slope.

The vain Spider-Queen says beauty is power and that's certainly how she became the boss. but while the other spiders are awe-struck with her gorgeousness, she's "hideous" to everyone else!

Originally one of many, countless Spider Legend Beasts dwelling in the depths of the Gorge of Eternal Depth, Spinlyn would come into contact with the lost Crominus and Crunket. Harassing them alongside her brethren, their attack would be cut short when she came into contact with CHI after Laval recklessly dumped the Crocodile Tribe's reservoir down the chasm.

Hungrily devouring and absorbing its innate energies, Spinlyn would evolve into a far larger, semi-humanoid version of herself and become a being of, at least to other Spiders, stunning beauty. After taking Crominus and Crunket hostage, she'd quickly rise to power as queen of the Spider Tribe due to her mesmerizing beauty and thus gain a loyal following. With Scorm and Braptor, the three led their tribes from the Gorge and into an exit located in the Outlands, and observing Mount Cavora in the distance, become fixated on using the power of its CHI, with Spinlyn in particular believing its evolutionary properties could be used to make her even more beautiful.

After establishing a headquarters in the Outlands, Spinlyn would quickly come into conflict with Scorm over leadership, likewise arguing over who supplied the CHI that transformed them in the first place, with Spinlyn having become convinced that it came from a 'Great Spider', in contrast to Scorm's 'Great Scorpion'. Despite their disagreements, however, the two would nevertheless put them aside to enact their plans of kidnapping the Legend Beasts, with Spinlyn keeping the Rhinoceros Legend Beast and Gorilla Legend Beast under imprisonment in her base. 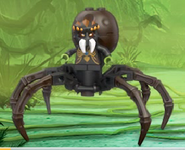