Speedorz are vehicles used by the inhabitants of Chima in tournaments or battles. They are a key element of the Legends of Chima theme, and appear in many sets as part of an action game.

CHIMA is a very large realm, which takes a long time to cross if your only transportation is by foot (or wings, if you have them). Long ago, the animals collected rocks that had fallen from Mount Cavora and carved them into wheels of extraordinary strength and power. They fitted these to small chariots and called them Speedorz.

The wheels are part of nature, and draw most of their energy from it. The wheels are always strongest in the lush jungles, verdant hills, and moss-covered canyons of CHIMA – wherever there is abundant life and growth. However, they struggle to move in barren landscapes or deserts.

There is an official level of Speedor sports with sanctioned competitions that fill the Grand Arena of CHIMA, although some of CHIMA’s younger creatures sneak off to the rugged canyons and jungle backroads of the Shadow Hills for a fun and fast thrill ride. The Grand Arena of CHIMA is located on a massive, flat, moss-covered patch in front of the Lion Temple. When competitions are held, the arena is literally transformed by the power of the “Golden CHI Orb” into a variety of intense tracks and competition courses. The rare Golden CHI is powerful enough to change the land itself, dramatically raising or lowering it, as well as building natural obstacles made of vegetation and rocks. Every tribe, no matter how great their differences, always sends a team of riders to compete for the Prize – that single, powerful orb of Golden CHI. Victory is a source of tribal pride for weeks following the contest.

Tribes also occasionally use the tournament to settle minor disputes and diplomatic conflicts. The Grand Arena competitions are officially about sports, but they can also be seen as an alternative to tribal combat. Rather than fight on the battlefields, tribes can settle their difference in the Speedor runs. For many years, the Speedor competitions were an incredibly civilized and efficient means for dispute resolution, but new tensions are escalating conflicts past what can be resolved in the Grand Arena.[1]

A person wishing to play with the Speedor holds the Speedor in one hand and the ripcord in the other. Then they insert the ripcord in a space in between the wheel and the frame and soon afterwards pull it out as hard as they can, causing the wheel to spin. They then let go of the Speedor, which proceeds to travel speedily forwards. Often, the object of the game being played will involve challenges including having the Speedor hit a certain target to have an orb of CHI or another object fall down or having it dodge a variety of obstacles. Trading cards are drawn during play, to decide the victor of each round.

The players set up all the obstacle features and decide upon how to calculate wins regarding obstacles. Each player shuffles their deck of 5 Speedorz Cards (can be adjusted per agreement) and places them face down to the side. 12 CHI crystals are piled up and also placed aside. Each player then activates their Speedor by pulling through their ripcord and release the Speedor on the count of "1, 2, CHI!". The players then draw a card from the top of their decks. The person who succeeded through the obstacle(s) decides which value they must all compare (Instinct, Speed, Courage or Strength). A player may use a CHI crystal won previously to boost their value as stated on the card, if electricity flows towards that value. Then, the player with the largest number for the selected value wins the round and receives 2 CHI crystals. This is repeated until a player has 6 CHI crystals, making them the winner.

Some customizations are encouraged for play. A combination of different obstacles are also recommended for increased difficulty, variety and playability. Card decks can be made larger with cards from different sets, as long as those cards share the same tribe symbol as the riding minifigure's card.

The aim of the game is to hit your opponent's CHI totem.

This new version does not make use of the values on the bottom of the card, however they are still present to be compatible with old style of play.

The sets vary in size. The smaller sets generally consist of 1 Speedor, 1 minifigure, 5 cards, 2 weapons, 6 CHI crystals and some obstacles or challenges (such as boulders to knock down or "flying" targets to hit). Larger sets generally consist of 2 Speedorz, 2 minifigures (3 in the case of 70011 Eagles' Castle), 10 cards (5 for each character), 4 weapons, and 12 CHI crystals and larger obstacles, challenges, or background features. Each Speedor consists of a minimum of 4 items: a frame decorated in the style of the Speedor's rider, a wheel, a power-up and a ripcord to power it.

70113 CHI Battles and 70114 Sky Joust are the only known starter sets to date. CHI Battles contains Longtooth and Wakz, Sky Joust contains Eris and Rawzom. Both sets each contain 2 slightly-modified Speedorz with one rip cord each, 10 trading cards, 4 weapons and 12 pieces of CHI. They also consists of a variety of obstacles and challenges, such as two ramps, a tower from which a blue ball must be knocked down using the Speedorz and the ramps, and some spike "pylons".

70115 Ultimate Speedor Tournament and 70011 Eagles' Castle are the only known battle arena sets. Ultimate Speedor Tournament contains Laval, Cragger, 2 slightly-modified Speedorz with one rip cord each, 4 weapons, and 12 pieces of Chi. It also consists of a variety of obstacles and challenges, such as a ramp, a statue from which a blue ball must be knocked down from using the ramp and the Speedorz, some flame "pylons", and a gate decorated to look like a lion. Hitting a target suspended from the gate drops down another blue orb. Eagles' Castle includes Ewald as a spectator with Worriz and Lennox, 2 slightly-modified Speedorz with one rip cord each, 5 trading cards, 8 weapons, 13 pieces of CHI and 1 Golden CHI. In the set, the two Speedorz launch from ramps at a grey column, on top of which is a piece of CHI. A rod connects the column and the main portion of the set, the "Eagles' Castle", which allows for the wing structures to open up and reveal the Golden CHI when the column is hit. 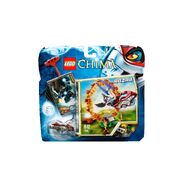 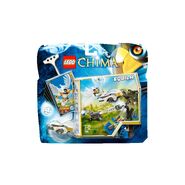 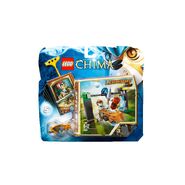 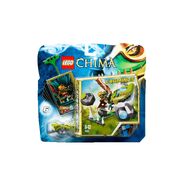 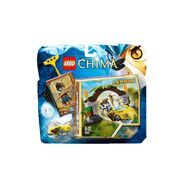 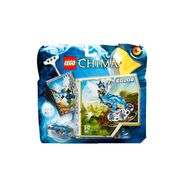 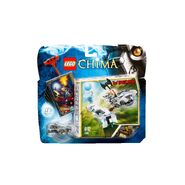 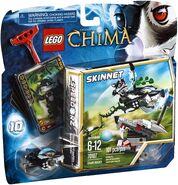 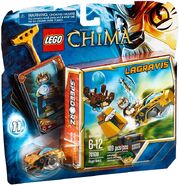 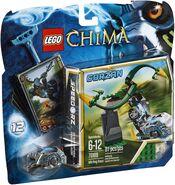 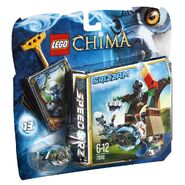 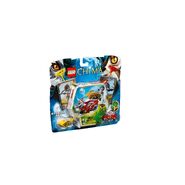 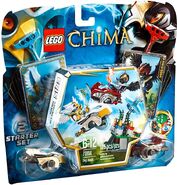 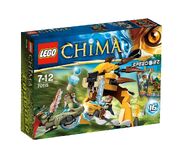 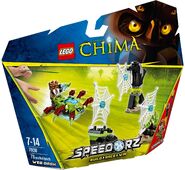 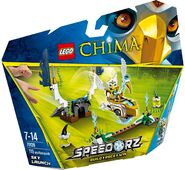 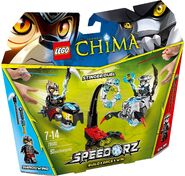 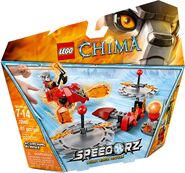 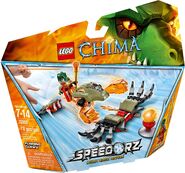 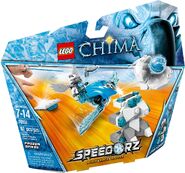 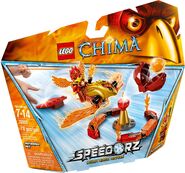 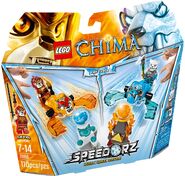