LEGO Legends of Chima Wiki
Register
Don't have an account?
Sign In
Advertisement
in: Out of date articles, Citations needed, Characters,
and 3 more

Skinnet is a young skunk who is claimed to be neutral. Despite this, he often helps the heroes more often than the villains.

Skinnet first appears in "The Legend of Chima," where Laval uses his stink as a weapon to force Worriz out of hiding in a game of hide-and-seek. He later appears in the episode "Market Day", where he accidentally stinks up the market, motivating the ravens to sell nose plugs. Skinnet later races in the speedor tournament but does not do very well.

In "The Hundred Year Moon," Skinnet reveals that while the Hundred Year Moon makes wolves hungry and aggressive, skunks are blessed with a sweet-smelling scent that causes flowers to blossom and other creatures to become tranquil, including the crazed wolves.

Skinnet learns his "true destiny" (or distinct lack thereof) in "Reunion Gone Wrong," where he appears as a "neutral mediator" to write a peace treaty between the tribes. This treaty includes extra clauses or "fine print" in the coattails, such as "Mount Cavora shall be known as Mount Skinnet" and having the other animals celebrate his birthday with fireworks. This is clearly an attempt to get the other animals to love him, however, the fine print is removed from the treaty to be dealt with later. He is shown elated at the end, as his lack of a destiny gives him a sense of freedom. It is here that he is first shown hanging out with Plovar on Spiral Mountain, which is later revealed to be his home.

Skinnet has another major roll in "Laval in Exile," where he takes advantage of Laval's exile status to talk to him and "play games" with him and Plovar at his home on Spiral Mountain. It is then that ShadoWind appears with the Pledge of the Pack, and Skinnet reveals that he is "friends" with ShadoWind. The Pledge is covered in a mysterious sap from the Outlands, which, despite being potentially poisonous to other animals, makes skunks "go nuts." This prove helpful when Skinnet licks the sap near the crocs' base, creating a distraction while Laval enters the base to return the Pledge to Cragger.

Skinnet's "gift" makes him immune to attacks from the dangerous creatures of the Outlands. As such, Laval has Skinnet make 4 jars of "Skunk-in-a-can" to use as deterrents to the flesh-eating plants in the Outlands.

Skinnet accidentally causes trouble in "The Crescent," where he accidentally releases one of his stinkies in the Crescent, driving the warriors out of the protective barrier and nearly costing the mission.

In "Wings of Fire," after balance has been restored to Chima, Skinnet's stink is shown to be the same as it was during the Hundred Year Moon, once again causing a sweet smell and flowers to grow nearby. Finally, Skinnet can be happy. It is unknown how this functions in the Outlands, however.

Skinnet is one of the most reliable elements of comic relief in Chima. Nothing ever goes right for this bumbling skunk. His tribe has vanished. His mightiest weapon is a foul odor... that accidentally slips out at all the wrong times. And even his name, Skinnet, implies a less-than-prosperous purpose.[citation needed] Yet Skinnet never lets the world bring him down. He always tries to tag along, or be part of the latest happening. Inevitably his presence backfires – or, more appropriately, “stink-fires.” But he is always quick to apologize when this happens. “Sorrrrry,” he says, with an awkward drawl. It’s not his fault that he can’t control his natural skunk powers, but he still feels compelled to atone for its punishing effect on others. Skinnet is not aligned with any tribe, and is possibly the most neutral creature in all of CHIMA. This is not by choice. He wishes he could be accepted by one side or the other, and prove himself a hero. However, while he has possibly the most potent weapon in CHIMA, both sides in the CHIMA Conflict are reluctant to use this “nuclear option” for fear it will harm them as well. Everyone actually likes Skinnet – they just don’t want to be too near him. He sometimes acts as a negotiator between the two sides, but he usually ends up clearing the room with his stink before a truce is agreed upon.[2]

The warrior closest to Skinnet is Eris the Eagle, who is always nice to him. But maybe that's because she can fly away when things gets stinky![3] He is good friends with G'Loona as well.[citation needed] 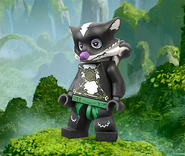 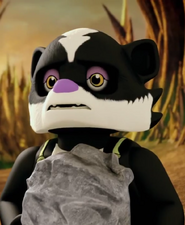