LEGO Legends of Chima Wiki
Register
Don't have an account?
Sign In
Advertisement
in: Characters, Villains, Scorpion Tribe,
and 11 more

Leader of the Scorpion Tribe

Scorm is the current leader of the Scorpion Tribe as their "king". As of Episode 26, he is responsible for awakening the long-lost Ice Hunters.

The King of Scorpions is as impatient as he is dramatic, evil and short-tempered. He wants to rule everything NOW! He controls his minions using his hypnotic sting or the force of his unpleasant personality!

Originally, Scorm was just an ordinary scorpion living in the Gorge of Eternal Depth until CHI  dropped by Laval caused him and various other scorpions to evolve along with the spiders and bats, all of whom gained an intense hunger for more CHI. They captured Crominus and Crunket, who took them to the surface and showed them the source of CHI, Mount Cavora, but only so they could escape. Crunket got away with help of Shadow Wind, but Crominus was recaptured.

Shortly afterwards, Scorm had his forces block up the falls of Mount Cavora so that his forces could steal all the CHI, but they were interrupted by the Tribes of Chima. Eight heroes later went into the Outlands to challenge the Dark Tribes.

Sometime later, Scorm took control of the Raven Legend Beast to steal Golden CHI  from Lavertus so that his minions could build a statue of "The Great Scorpion In The Sky", who Scorm believed threw the CHI down into the Gorge so that the Crawlers could have it. However, they were interrupted when Laval, Lavertus, and Razar arrived, brought the Raven Beast back to their side, and stole back the Golden CHI. After they retreated, Scorm studied Razar's Speedor and learned how to make more like it.

The Eagle and the Bear

After completing their Speedorz, Scorm trapped the Bear Legend Beast on a see-saw trap with the Eagle Legend Beast's eggs. After Laval and Bladvic rescued them, Scorm showed up and raced them, but Bladvic and the Bear Beast were captured when they stopped to nap. Laval then had Bladvic CHI up, and the Dark Tribes and their were crushed.

Scorm told Spinlyn that he knew that the eight heroes would come after Crominus and Lion and Wolf Legend Beasts, and he had all their forces gather up in the Scorpion Cave.

Scorm controlled the Wolf Beast and captured Cragger and Worriz, then argued with Spinlyn over which one created them, leading Cragger to get an idea. After Laval, Eris, Gorzan, Rogon, Bladvic, and Razar invaded to rescue them, Scorm was shocked when Cragger told him that it was actually Laval who threw the CHI into the Gorge to keep Cragger from getting it. Scorm then blasted Laval into the cave with the Lion Beast with his Scorpion Stinger.

Scorm continued to battle the others, who gained help from Lavertus and Rinona in the Wind Shadow. They knocked the "Great Scorpion" statue down and Scorm tried to protect it but failed. The Scorpion Cave soon collapsed and Scorm was the only one who was seen after that. Even after all he had done, Laval gave Scorm their last CHI Orb and told him to use it wisely before the cave collapsed.

Scorm mourned the loss of his people and did not see any use for the CHI that Laval had given him, so he instead threw it into a cave deeper in the Scorpion Cave. However, unbeknownst to him, he accidentally awakened a frozen Sir Fangar.

While wandering the collapsed caves, Scolder and Scutter brought Scorm more CHI, but he threw it into the caves, allowing Fangar to awaken his Ice Tribes. While trying to seal the cave, Scolder, Scutter, and Scrug were frozen by the Ice Tribe. Scorm tried to fight back with the Scorpion Stinger but it was frozen too.

Scorm was later accidentally defrosted by Flinx, which caused Scorm and his forces to attack Laval and his friends. Laval tried to get the Dark Tribes to work with them[clarify], but Scorm refused. In the end, Sir Fangar's Ice Fortress melted and collapsed, causing Scorm and his Scorpions and Spiders to fall into the Grand Arch Way, but Spinlyn saved them.

Following the battle, Scorm and the rest of his Outland forces retreated back to their home. Later on, following the perfect Great Illumination, they were presumably cured of their hunger for CHI and reformed. 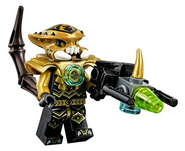 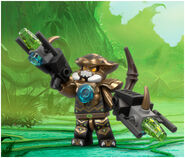 Scorm in his speedorz