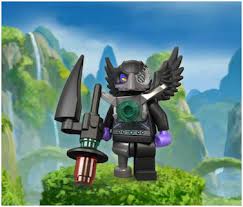 70003 Eris' Eagle Interceptor
Rizzo is a warrior of the Raven Tribe. Rizzo also appears as a boss in Chima Online, where he has an unusually complicated boss fight.

Rizzo is a scruffy scavenger with ragged feathers, an eyepatch, and peg-leg. He prides himself on being "the bottom of the bottom feeders." Even Ravens have a slight bit of dignity, but not Rizzo. He has shamelessly nicknamed himself the "Shah of Shamelessness."

In Chima Online, Rizzo is a Dungeon boss. He must be fought twice, once in two different dungeons. He reveals that he is working for Reegull, and when the flowers controlling Rizzo are smashed and he is defeated, he vows revenge against Reegull.

Rizzo guards the final one of the Tears of Cavora, but unlike Rukus, Runk, or Wilhurt, he will not immediately come out to face the player. Instead, this fight occurs in three distinct phases.

When the player first enters the cave, they will encounter a single Elite Raven Guard (easily identified by his silver armor and distinct Bulwak/Thundax weapons) as well as a pair of raven grunts. Raven grunts will continually spawn in pairs of either ranged or melee variants until the Elite Guard is smashed.

Once the first Elite Guard is smashed, another Elite Guard will spawn further south in the arena, this time accompanied by an additional spawning grunt and blaster-medic. Grunt spawn rates will increase and the medic will periodically respawn until the second Elite Guard is also smashed.

When the second and final guard is defeated, all other spawns will stop and Rizzo will appear in the far north end of the arena alongside an escort of two high-level raven warriors; one wielding a grandorsion and vengious, the other wielding a healing beamer and swamp gas launcher. Rizzo himself will carry his signature Bazooklaw and can easily be identified by his silver peg-leg; he also always spawns in the middle.

At any time during or after the fight, players can activate a pressure plate which lowers the spikes blocking off the island with the final Tear.

The first phase is very straightforward: the player should focus on smashing the Elite Guard as quickly as possible before his support can wear the player down. If the player does so, they won't face too much resistance.

The second phase, however, requires a little more effort, as the raven medic, if left unchecked, can heal the second Elite Guard and hinder the player's progress. Grunt spawns will occur much more frequently, so it is advised to also keep them in check, if possible. Always attempt to destroy or distract the medic as soon as he spawns!

The final phase can be the trickiest if players are not prepared for the special medic that accompanies Rizzo. His swamp gas launcher will not only poison the player, but will also cause fear, making the player lose control of your movement and attack and thus leaving them helpless. This medic should be distracted as much as possible (bee hives work well) or destroyed as quickly as possible (he cannot heal himself). The second guard has much more HP and can also inflict zap on the player, stunning them occasionally. Being melee only, it is advised to take him out from a distance if possible. Rizzo himself has the least HP out of the three and is particularly weak when it comes to attacking, though his Bazooklaw will knock the player back when he fires it. Note that it is possible to defeat Rizzo immediately if the player CHIs up and focuses directly on him. His reduced HP makes it possible to smash him before the medic can begin healing him and often allows the player to finish him off despite the medic's healing if their attack is sufficiently strong enough.