LEGO Legends of Chima Wiki
Register
Don't have an account?
Sign In
Advertisement
in: Rhino Tribe, Rhinos, Rhino,
and 4 more

70131 Rogon's Rock Flinger
Rinona is a member of the Rhino Tribe and is the older sister of Rogon.

Rhinos aren't known for their intelligence but the girls are actually pretty smart! Rinona is no exception! She stows away on Rogon's Rock Flinger to keep him out of trouble... and because she doesn't want to miss anything!

During the second wave of Chima, when the heroes were in the outlands. Rinona was uncovered by Rogon. She either stowed away on-board the tank or was hiding with the male rhino with his permission. While in the outlands, she assisted the heroes of Chima against the scorpions, spiders, and bats. And later returned home to Chima.

Later, when the Ice Hunters attacked. Rinona was frozen, but later freed when Fangar's fortress was destroyed. A few months later, when the Fire Harnesses were being located, she joined her brother in the final battle with the ice hunters, playing a major role in a handful of the smaller conflicts.

Rinona, like all rhinos, has grey wrinkled durable skin. She has dome-shaped hoof-like feet, as well as deeper colored spots and large wrinkles on her knees. Most unusually, are the lavender-colored markings on her face. It is unknown if these marks are natural or tribal dye. They appear around her eyes and on her horn. Rinona's eyes are yellow.

During the Outlands journey. Rinona was rather scantily clad (as pictured) most likely to cope with the high heat of the jungles. During that stage, she wore a black and purple tribal bikini of sorts. Consisting of a massive black necklace that's supported by two decorative chains. As well as the CHI-holder. Underneath this, is her purple top which is held on by these same chains. Rinona's stomach is exposed, and despite her tough skin which would most likely hide it. Her belly button is in full view. She bears a black iron belt supported by another chain. This holds on a black and purple loincloth tied on by chains, this is all she wears to cover her lower portion. This loincloth seems to come in two layers, a smaller purple part over the black one. From the TV show, it is known that Rinona's loincloth covers her backside, however.

Later in the Fire and Ice war, Rinona was clad in a slightly different garb. Consisting of a deep grey top also connected to chains, as wells as a slightly damaged, phoenix-shaped breastplate over it. The "beak" of this phoenix covers a bit more of her stomach area. She also wore Black and Red shorts. She never gained a fire harness, being a minor character. 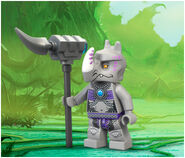 Rinona as she appears in the TV Series. 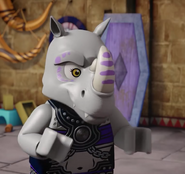