LEGO Legends of Chima Wiki
Register
Don't have an account?
Sign In
Advertisement
in: Raven Tribe, NPCs, LOCO only characters

Legends of Chima Online
Reabait is a Raven NPC who appears in Legends of Chima Online. There, he sells various Items. His shop is set up next to the Portal Pad on the Outpost of all players, provided that they have completed the tutorial and have gained ownership of the Outpost. Interacting with him opens the Instant Shop, allowing players to purchase premium items or items being sold by other players. 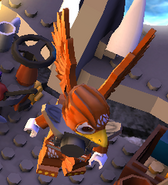