LEGO Legends of Chima Wiki
Register
Don't have an account?
Sign In
Advertisement
in: Ravens, Characters, Male Warriors,
and 2 more 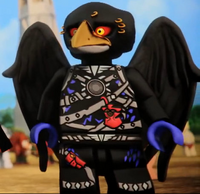 70000 Razcal's Glider
Razcal is a warrior of the Raven Tribe. He serves as the tribe's accountant and, according to his Bio, is a master pilot.

Razcal has black feathers throughout his body with purple detailings, like most Ravens. He has 2 large wings, yellow eyes (surrounded by red), purple hands, grey claws and intact limbs. Razcal has a prosthetic upper beak, which is shining gold and a grey (intact) lower beak. His head also has gold piercings; 2 on the right side, 3 on the left side and 1 on his forehead (towards the left). Razcal's torso is decorated with various grey straps for securing grey or red bags of cash, as well as a CHI medallion in his chest. He also has Raven Tribe symbols on his collar, waist and legs, which are silver in the TV series and gold in the minifigure form. In minifigure form, Razcal also dons a grey CHI harness.

Razcal is the Raven tribe's accountant. All Ravens steal, but not all of them count. That's where Razcal comes in. He keeps track of everything the Ravens pilfer, and figures out its value (Adjusting for inflation and other 'market forces'). It's important for the Ravens to get a sense where they are in the continuum of crime. The Ravens derive a lot of status from their ability to steal early and often, so Razcal's "Official count" is often the barometer of success within the tribe. Without him, they'd just be thieves. WITH him, they can be "Master Thieves."

Razcal knows exactly where all the money is. As the Raven Tribe's respected accountant, he keeps a beady eye on all the Raven's wheeling and dealing. It's important work - the tribe's morale depends on his official count of their profits.

Calculating Razcal is not just good with figures, he gets stuck into the business of grabbing swag too. As an expert pilot, he flies one of the Raven Tribe's precious gliders in daring CHI raids. The bottom line is: the more trinkets and treasure he can swipe, the more there is to tally up afterwards!

Razcal leads an air of respectability to the Ravens. Without him they'd be plain old thieves, but with him they are entrepreneurs.

Razcal is seen beside Razar, whilst Razar announces the alliance between the Ravens, Wolves and Crocodiles.

Razcal walks through the forest path while carrying an abacus, with Razar and another Raven Soldier, and they confront Gorzan at his flower preservation zone. Razar then orders Razcal for "the numbers" when Gorzan agrees upon a deal to cover the "additional travel expenses." Razcal then flies quickly to the detour, when Gorzan becomes angry over Razar trying to sell him his own flower.

Razcal helps Razar and Rawzom steal and paint Laval's Speedor gold. When Laval confronts them about it, Razcal exclaims, "He's damaging the merchandise!" Laval resists, so Razcal and Rawzom push him away. Laval then proposes a "deal", to trade a box of nothing for his Speedor, in which Razcal confirms that the Ravens do not have a box of nothing. Later on, Razcal steals the Golden CHI with his friends, after being paid by Crooler. Laval then confronts the Ravens and jumps onto Razcal's CHI Raider, throwing him out of his vehicle. When Laval threatens to hurt the Raven's things, Razcal screams that he "can attack [them], but not [their] merchandise." The Ravens finally retreat, with Razcal handing Laval the stolen Golden CHI and helping clean his Speedor.

Razcal appears with Razar and Rawzom when Laval and Eris approach them for help in flying the lion troops to the top of Eagle Spire. Razcal then flies Lagravis, Longtooth, Leonidas and 3 other Lion Soldiers to the battle, on a CHI Raider. When the Crocodiles bring the Wolves, Eagles and Lions to a deadly fate, Razcal and the other Ravens save them by cutting the chains attached to Eagle Spire. Razcal shows his tribe's intentions by shouting to Lagravis, "For Customers!"

Razcal finds the box of Dom de la Woosh merchandise and sells it at the Raven stall with Razar during market day.

Razcal stands next to Razar's Speedor, as Razar tells him that they have no worries regarding thieves, as The Thieves' Code ensures no thief steals from one another. However, Furty steals their code, which leaves them both in calamity. Afterwards, Razcal is seen in the midst of the heated crowd, participating in the fighting by chasing some Beavers with boards.

Razcal, Razar, Rawzom and 2 other Ravens hold a sheet of cloth to catch the bags of CHI being delivered by Eris and Laval.

During the bootleg Raven Tribe Speedor race, Razcal holds up a fake ShadoWind helmet for Laval. Razcal then holds up a picture of a starting gun, to signal the Speedor riders to take off. During the race, he sells preorders of "Razar themed merchandise" when Razar takes lead. After a while, he counts the money from ShadoWind merchandise sales, along with Razar.

When Cragger delivers Chigull, Razcal inspects it and shows Razar. He rejects the delivery of the fake CHI along with the other Ravens, knowing its consequences.

Razcal and the other Ravens attack Eagle spires, by stealing all the Eagles' things, due to the Eagle philosophy of no one owning anything. After some intense battle, the Ravens "retreat" into their "new home", the Eagle Spire and Razcal shuts the door. Whilst inside, Razcal complains how there is not much to do inside the Eagle Library. He soon leaves the Eagle Spire along with the other Ravens, after being unable to make any sales from up there. Razcal explains how he misses the racetrack, customers and junk. When they all return back to the Raven Town, Razcal rides on his Speedor and tells Rawzom how much he misses the junkyard.

Laval says goodbye as he walks past the Raven Junkyard during his exile, to Razcal, Razar, Rizzo and Rawzom as they walk with their cart.

When Razar prepares his plan on selling "shade in a jar", Razcal questions whether it will work. As they both fly on their CHI Raiders to sell this, the real Black Cloud comes over and steals everything from the 2, leaving them emptyhanded in the air as they fall to the ground. Razcal then comes along with the Raven army to join forces with all the main Chima tribes, to fight against the black cloud covering Mt. Cavora.

Razcal takes part in the large battle between the Crocodiles, Wolves, Ravens and Rhinos, vs. the Lions, Eagles, Gorillas and Bears. He is later seen approaching the Crocodile Legend Beast when Laval arrives on it with Crunket.

Razcal standing next to Razar, during the Raven gathering in episode 2