Dispersed throughout the land

Alive
The Nomads are those who do not belong to one of the tribes in Chima, as they are the only members of their species. Most nomads live secluded from the rest of Chima, whilst some exist among the other tribes. The Nomads do not have any allies, however they can be hired by other tribes to carry out tasks. These characters are not shown to have any particular vehicles or buildings in possession besides their Speedorz.

(According to the "Legends of Chima Character Encyclopedia")

"While most animals in Chima live in tribes, a few choose a solo life. Usually the only one of their kind, they turn up at major events and play a role in proceedings from time to time. But for the most part, these solitary souls prefer a quiet life away from the pomp and politics of Chima's main tribes."

Each nomad is from a unique species. The nomads usually wear rough, self-made clothing; usually made from scrappy materials or natural items. Not all nomads have a CHI harness (or at least in view of others), such as Furty, who has a scarf in place of where the harness should be.

Plovar is an exception, as he is not anthropomorphic, therefore wears no clothing. 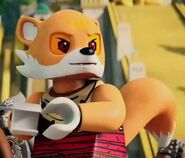 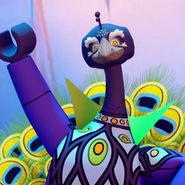