Royal Guard of the Phoenix

70141 Vardy's Ice Vulture Glider
Lundor is a warrior of the Leopard Tribe and a member of the Fire Tribes in service to King Fluminox.

Lundor is the “historian” of the hidden city’s guard. He remembers everything that has ever happened. Some of his fellow guards appreciate this because they can learn from the past. Others find it annoying when he shares a story that makes them look bad. Because Lundor is a spotted leopard, the Tiger tribe members find him a curiosity. They are always trying to wipe his spots off or play “connect the dots” with them. Lundor is proud of his spots but really wishes everyone would just leave him alone about them. He just wants to be judged by who he is, not how he looks.[1]

Lundor is present when Laval, Eris and Cragger arrive in the temple, and later stops Laval and Cragger from getting the fire CHI at Fluminox' command.

Lundor informs Laval that Li'Ella is not on duty today, and she arrives hoping to go to the Lion City.

Li'Ella tells Lundor how was her tour in the Lion CIty, excited to share her amazing exprience with him. Suddenly a loud smash was heard, Lundor and Li'Ella rushed to see what it was- the lion City was attacked again. Panicked, Li'Ella and Lundor run to Tormak and Fluminox, and Li'Ella demands they'll go to help the lions.

Tormak helps Lundor on guarding duty, since Li'Ella is gone. Tormak gets lost in memories and sobs over Li'Ella's double headed axe, and Lundor asks him in awe if he cries, and Tormak simply answers that he smells her scent, and asks Lundor to excuse him, to which Lundor respones "sure boss, anything for you".

Later, Tormak arrives to the entrance to the temple with the Artifact, Lundor mentions the hunters in the horizon, but then notices the Artifact, however Tormak knocks him down before he can react.

The hunters build an ice wall in front of the crescent, and Lundor explains that it's to keep the tribes of Chima away from the fire CHI. Tazar insist that they need to get them the fire CHI, and Lundor brings up what happened to Tormak upon disobeying-alone and chased by all. Lundor and the tigers decide to stay put and do a commanded.

Lundor fights the hunters on top of Mount Cavora along with the other phoenixes and tigers. 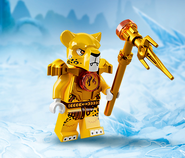 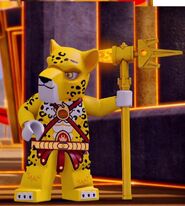 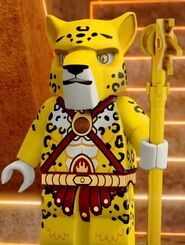 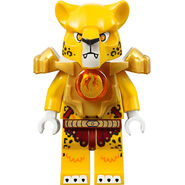 Lundor Running with the Fire Warriors