The Lion Tribe is one of the tribes in Chima. They guard over the sacred pool of CHI since they are fair and just. The tribe is allied primarily with the Eagle Tribe and the Gorilla Tribe to stop the Crocodile Tribe and their allies from stealing all the CHI in Chima. However, after the end of the first conflict, its members sent their prince, Laval, to stop the Outlands tribes and rescue the Legend Beasts. Some members of the Lion Tribe have the ability to make a very loud roar and call the other tribes to their aid, though it could be that only the royal family can do this, since only Lagravis, the Lion Legend Beast and Laval have been seen to use this ability (The only exception is Eris as she called out to the other Tribes in The Heart of Cavora to launch the illumination).

The Lion Tribe has a royalty, ruled by a king & queen.

The Lion Tribe resides in a massive castle near the bottom of Mount Cavora. This castle is essentially the capital of Chima, as it is the location of both the monthly Speedor Races and the Sacred Pool of CHI. 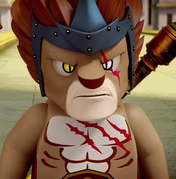