Guards the Hidden City of the Phoenix

Li'Ella is a female Lion who is introduced in the summer of 2014. She is a friend of Laval and his friends.

Li-Ella is the adoptive daughter of Tormak and a member of the guards who watch over the hidden city of the Phoenix. She is tough and smart and more than able to take care of herself, but her world gets turned upside down when she meets Laval and discovers that there are lions living someplace besides the hidden city, and some of them are cute. What neither she nor Laval knows is that the evil Sir Fangar is also interested in Li’Ella and wants her to be his queen when he conquers Chima. Laval, Li’Ella and Fangar are heading for a showdown …[1]

Li'Ella was first seen after the Blazing Phoenix Bastion landed on Crescent Hill. She caught Laval's attention, but to a lesser extent, Tormak's as well, and he knocked the Lion down onto his back. The lioness told her father to stop, Fluminox saying they are here to protect. Tormak told him he was simply protecting Li'Ella, in this case from Laval, who she laughed at.

Laval later thanked her personally for saving the heroes and making him feel 'hopeful'. She herself felt hopeful as well, and she laughed again, guarding the Temple. When Laval mentioned he was in love with her to Lagravis, he himself, for the first time in a very long while, laughed at his so-called love.

Li'Ella comes with Fluminox and the tiger guards to warn Laval and his friends from melting Sir Fangar's Ice Fortress. Laval hears her, and after Li'Ella claimed she hates swimming, he says the same.

Laval and Li'Ella have a chat on the Cresent, waiting for the Phoenix. Li'Ella tells Laval she really wants to visit the Lion City and she is sure that it's full of more cute lions boys. Laval knows she refereed to him, asking her if she thinks he's cute, but she covers it saying "I mean, the city, it must be cute, right?". Laval claims that he is perfect to give her a tour, being the prince.

Li'Ella is present with Laval, Eris and Flinx when Fluminox and Tormak inform them about the underground tunnels.

Li'Ella takes a free day from her guarding duty as Laval offered her a tour of the Lion City. Although Laval want to be alone with Li'Ella, she doesn't mind Flinx joining them.

In the city, Laval shows Li'Ella the lion statues, and compares himself to one of them, but Flinx interrupts them, showing Li'Ella a toy boat. Failing to get the attention back to him, Flinx leads Li'Ella to Laval's room to show her his toys. Panicking' Laval throws all his toys out of the window, and proceeds to show off his fighting skills to Li'Ella, but she continues on with Flinx.

Later, Laval and Li'Ella get to spend some time alone as Flinx was distracted in the yard, but he quickly comes back. All of a sudden, Ice Hunters make their way to the city, and Laval takes the chance to give Li'Ella a ride on the Legend Beast. Flinx follows them, and Laval says that he is happy for once for crashing his date, and Li'Ella admires this "date".

Back in the temple, Li'Ella is surprised to see her father there taking care of the attacked lion temple. She asks him if everything's alright, and tells Laval and Flinx about Tormak's story.

Li'Ella tells Lundor how was her tour in the Lion CIty, excited to share her amazing experience with him. Suddenly, a loud smash was heard that Lundor and Li'Ella rushed to see what it was - the lion City was attacked again. Panicked, Li'Ella and Lundor run to Tormak and FLuminox, and Li'Ella demands they'll go to help the lions. Tormak claims they can't help the groundborne with every little problem, but Li'Ella insists- reminding him that he's a groundborne too.

In the flying bastion, Fluminox is still stubborn, insisting that it's not their battle. But Li'Ella reminds him that Flinx is also in the Lion City, however Fluminox still insist no harm will come to him, Tormak mentions that it won't hurt to take a look, finally convincing Fluminox.

Reaching the city, Li'Ella wants to help too but Tormak orders her to stay in the bastion, nevertheless Li'Ella jumps off and heads to the city. There, she involves in the fight, catching Mottrot's trunk, getting everyone's attention- including Sir Fangar's. Getting angry, she steps harshly on Mungus' foot, sending him slipping down the frozen stairs. Mottrott claims it looks fun, so she spins him with his trunk down the stairs as well.

Sir Fangar changes his original plans to kidnap Flinx, and takes both him and Li'Ella. Laval tries to stop him, grabbing both their legs, but Li'Ella insist of saving Flinx, biting Sir Fangar's hand that held Flinx, saving Flinx and Laval, but not herself.

Li'Ella is held captive at Sir Fangar's trophy room, but she wasn't frozen. According to Sir Fangar, she won't feel his heart if she felt his freeze. After praising himself, he claims that he will be the king to her queen, claiming he wants to marry her, and Maula takes Li'Ella to the "bridal carraige", although Li'Ella refuses to marry him.

Li'Ella's now held captive at a mammoth ice stomper, and later taken to the Spiral Mountain, where she's watching as Maula, Mottrott, Vardy, Vornon and Voom Voom plan the wedding.

The wedding day has come and Laval, Eris, Cragger, Worriz and Rogon come to her rescue, much to Li'Ella's luck. The theme circles each mammoth stomper with cables, in order to find the one where Li'Ella is and take it down, while the hunters try to stop them. The mammoth stomped that occupied Li'Ella has fallen from the top of the mountain, but luckily- she managed to catch a CHI and Laval's sword that he threw her, and was saved.

Flying back to the Phoenix Temple, Li'Ella thanks Laval for saving her, and joking with him about their "date". Claiming she wants to tell her dad all about it, Laval seems worried, and starts to tell her what happened to Tormak.

Back in the temple, Li'Ella runs to Fluminox, worried about her father, but Fluminox quickly changes the subject and announced that Flinx was captured. Li'Ella claims that she can track and find him, but Flinx is on Fluminox' number one priority.

The heroes fly to save Flinx from the Gorge of Eternal Depth, but after getting Flinx, the hunters fill the gorge with rocks and the heroes are stuck.

The heroes are stuck in the Gorge of Eternal Depth, but luckily Lavertus shows up. Li'Ella is surprised that Laval has a relative at the bottom of the world, but Laval takes it easy knowing anything can happened with Lavertus.

Later on Lavertus teases Laval about Li'Ella, with Laval answering "Sorry uncle, she's not my girlfriend, or is she?", and Li'Ella gives a sweet smile.

After the heroes get free from the gorge, all of Chima is frozen except the Outlands. The heroes hoped to save Chima with the eight fire wings, but since Tormak stole the map, this is impossible. Li'Ella is heartbroken, she knows her father will help them, but she can't keep thinking about him there, suffering all by himself. The group comforts her, telling her how each one of them went through something similar, and Tormak will too.

All of a sudden, a bright light appears in the distanced Outlands, and everyone wonder what could it be.

Li'Ella, Laval, Eris, Cragger and Lavertus follow the light into the Outlands, Li'Ella feels aches in her chest, claiming that as they get closer to the light the pain grows. They discover the light was coming from Tormak's CHI-Up, caused by the power of the Artifact, now burned inside Tormak.

Li'Ella shows her concern towards her father, but Tormak tells her that he needs to help them, and not the opposite.

After finding the first Fire Wings, the heroes agree to split up, and Li'Ella decides she'll go with her Tormak, saying she'll never let him out of her sight again, showing her great love for Tormak and his well-being.

Tormak and Li'Ella went together to find Fire Wings, together the found two. Meeting with Laval and Cragger, they give them the wings, and claim they have something else to take care of.

Later it is revealed that they went to fix the Phoenix Flying Fire Temple, and come to the rescue the heroes. A Vulture is on the hunt to catch Laval, Li'Ella jumps off the bastion onto the vulture's plane, and throws him overboard while telling him to stay away from her boyfriend.

After the Great Illumination, Tormak and Li'Ella landed on Mount Cavora, Li'Ella asks Tormak desperately if their friends are okay and he assures her that this Illumination was successful. 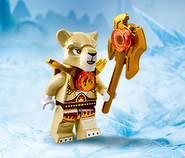 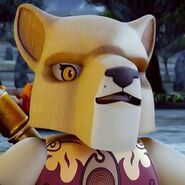 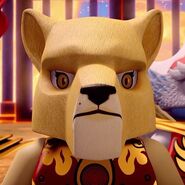 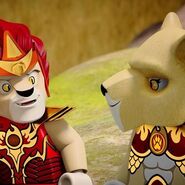 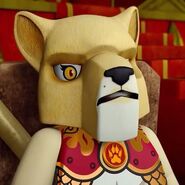 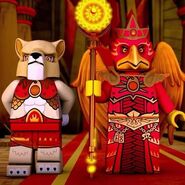 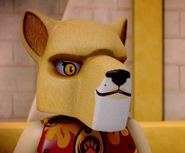