Leonidas is loyal foot soldier of the Lion Tribe. Strong and helpful in nature, Leonidas is a close guard to his king, often accompanying him on missions and standing guard to the Golden CHI during Speedor tournaments. Leonidas is known for struggling to multitask, only being able to do one task at a time, however he can still complete each task to perfection when done in turns.

Like the rest of his tribe, Lennox has beige arms, torso and legs, with white hands. His feet have claw markings, and on his knees he wears a golden kilt with gold and black markings. Over his chest, Leonidas has a single blue strap to hold his CHI medallion, in which he can plug CHI. Leonidas has well-defined muscles on his chest, with the his armor overall being light. Leonidas has a bright orange mane, as well as a crooked smile to distinguish him primarily from the other Lions.

Leonidas is a Lion foot-soldier and guard. Leonidas is not dumb. He just can't keep more than two ideas in his head at one time. If you give him a command – "Guard the entrance to the Temple" - he will execute it efficiently and without question. However, if you then give him a second command – "Clean your sword at the same time!" – he will get completely confused. He's the kind of guy who actually CAN'T chew gum and walk at the same time. But if you just want him to walk OR chew gum? He will do each of those individual tasks with more gusto than anyone else.[1]

Fearless Leonidas never shrinks for battle - unless he becomes too confused to remember what to do! When Leonidas has more than one thing to think about, there's no telling what muddled mishap may follow. Leonidas can usually be found guarding a post at the Lion Temple or in the company of his king, Lagravis. Although, he can be forgetful, Leonidas has good intentions and always tries his best! Leonidas can keep up with his king thanks to his swift Speedor. Styled to look like a fierce animal on the attack, the orange-and-blue matches its driver's look perfectly. Leonidas is blessed with large vocal chords - his warning roar has woken the sleeping Lions and deterred intruders many a time.

Leonidas first appears in The Legend of Chima, as he takes part in Laval's The Age of Becoming ceremony. As the Lion Temple undergoes attack, he helps defend the temple and CHI. His lack of multitasking is quickly revealed, as Leonidas becomes confused from Lagravis' instruction to "Protect the temple, Protect the CHI." This confusion makes Leonidas be thrown into a tree by a Raven glider. In the flashbacks, Leonidas is shown to have guarded Laval's room when he was grounded, then taking part in the battle against the Crocodile Tribe.

In The Great Story, Leonidas serves in the battle, and delivers the Golden CHI and protects it with Longtooth. In The Warrior Within, he also helps defeat the Crocodiles, then asks Laval what happened with the Crocodiles' CHI. These are the roles Leonidas plays throughout the television series.

During the Black Cloud invasion to Mount Cavora, Leonidas teams with the rest of Chima to attack it. During the rise of the Ice Hunters, Leonidas defends Chima and powers up with fire CHI to vanquish the enemies. Following the great illumination, he celebrates with the others as Chima becomes peaceful. 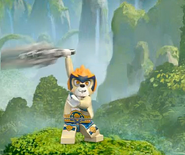 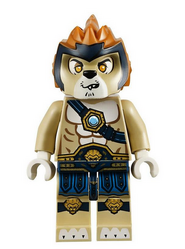 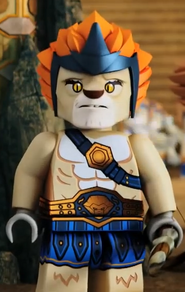