Lennox is the vehicles expert of the Lion Tribe, having a profound knowledge over them as well as serving as a brave foot soldier. Lennox likes to ride the vehicles made by him, especially on his own for fun. Lennox is usually judged by his enemies by his attitude and age, however, he can be formidable to villains with his immense strength and intelligence.

Lennox has beige arms, torso, and legs, and white hands. His feet have markings of lion-like toes, and he wears a blue kilt with golden and black markings, and bands on his knees. Over his chest, he wears a blue medallion with an extra strap, in the center of which he can plug CHI. His chest markings are white and muscular-looking. Lennox has a spiky brown mane of hair with a dark blue or black border, his face is beige, and he has a white muzzle. His nose is black, and he has a small brown beard under his black-printed mouth. Lennox's eyes are orange.

Always riding either a Speedor or his Lion Attack vehicle, Lennox is generally regarded as a freewheeling guy out for a good time. True, he drives the Lion Attack vehicle like there's no tomorrow, and anyone getting in the way of his rushing Speedor had better look out. But he has hidden depths, and actually knows just about everything there is to know about two and four wheeled vehicles. He might look like an easy mark to his enemies, but Lennox has a few surprises for them.[1]

Laidback Lennox likes nothing better than riding fast and free on his Speedor or Lion Attack vehicle. In fact, anything on wheels is comfortable ground for this mechanical whiz - he knows just about all there is to know about vehicles of all shapes and sizes. Lennox wears clothing similar to his fellow lion guards, but subtle differences make his gear perfectly suited for travelling super-fast: an extra strap secures his CHI medallion in place, particularly handy for racing through the forest at top speed. Enemies often underestimate Lennox, but the truth is this young Lion is both strong and skilled. He is a master of weapons and all types of vehicles - and is even unphased by driving in the Lions' speedboats on water! The adventurous and easy-going Lennox is the youngest foot soldier of the Lion Tribe. 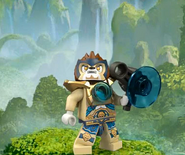 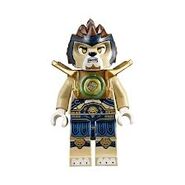 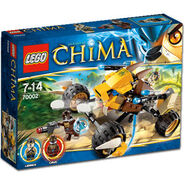 Lennox in the TV series