Lagravis is the king of the Lion Tribe and the father of Laval. He currently appears in the sets 70010 The Lion Chi Temple and 70108 Royal Roost. As King of the Lions, Lagravis is obsessed with making sure the Lion rule set is maintained and followed.

Lagravis is the king of the Lion tribe and the father of Laval. He believes very strongly in tradition and rules, and he can be very stubborn at times. He and Laval argue sometimes when Laval does not want to follow the rules, but both respect and love each other very much.[1]

Long ago, when Laval was merely a cub, they exiled one of their greatest warriors and Lagravis' brother: Lavertus. They didn't see or hear from Lavertus for ages. His wife is not mentioned, seen, or heard from either.

The Legend of Chima/The Great Story

Lagravis was king of the Lion tribe that protected the Chi. When Cragger tried to steal the Chi, Lagravis and the Lions stopped him. He then got in a fight with Crominus. When Laval was in trouble, Lagravis came to his aid with the Lion army. Lagravis also moderated the contest for the Golden Chi. When Laval was to get his first taste of Chi, Lagravis was present. Unfortunately, the Wolves and Crocs, allied with the Ravens, attacked the Lion Temple. Lagravis then gave a roar which summoned the Eagles and Gorillas to his aid. Lagravis fought well but being outnumbered, the Lions began to lose. Fortunately, Laval came with the Lion Legend Beast, and the Lion Temple was saved.

Lagravis hears how the night of the Hundred Year Moon drives the Wolves insane and closes down Chima when Gorzan arrives and informs them that G'Loona has gone missing and he sends Laval and Gorzan to find her.

In the riot created by Furtivo, Lagravis gives the Golden Chi to Shado Wind and cancels all Speedor races.

Cragger and the Crocodile Tribe have been held prisoner by the Wolf Tribe. When Laval told Lagravis "No one in Chima is free if a single one of us is locked in a cage," Lagravis responded, "Laval! Don't do anything rash!", then becoming annoyed at Longtooth for saying "Good luck with that." Lagravis then hosted a meeting with the rulers of the Eagles, Rhinos, Gorillas, and Bears. At the end of the episode, Lagravis told Laval that the ruler had set up a Croc rescue later that week, but Laval said that he, Eris, and ShadoWind (who was actually Furty) saved them and crushed the Wolves, even though the wolves were faking and were seen partying at the end. Laval was happy to be quoted by Lagravis for the first time.

Lagravis once again doesn't do much. He is only seen with Longtooth as Laval and his friends drive by the Lion Temple while doing tricks on their speeders. Lagravis only says "What are those kids doing?".

Lagravis reluctantly exiles Laval for stealing an orb of Golden Chi, but gets captured by Cragger and held hostage, in which Crooler tells him why Cragger is acting evil. He is rescued by Laval and temporarily releases him from exile.

A Black Cloud starts attacking Mount Cavora, and the Lions gather up every tribe in Chima and work together to defeat the Black Cloud and drive it away. However, unbeknownst to them, several falls in Cavora are closing up...

Lagravis roaring to summon the Eagles and Gorillas 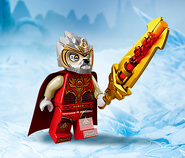 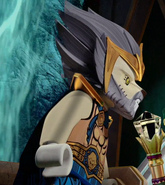 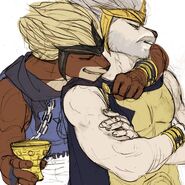