70223 Icebite's Claw Driller
Icepaw is a warrior of the Ice Bear Tribe. He appeared in the final 2 episodes of Legends of Chima, as well as some finale minisodes. Icepaw is one of the few ice bears without any ornaments or tattoos on his head, as he has a plane white head with a purple wound. He wears a CHI harness across his waist and has a frozen right leg. Icepaw has a very short screen time in the TV series, much like all the ice bears, as he is only deployed in the last moments of the battle with his tribe, in which a resolution is quickly reached.

Icepaw has white fur covering his body, making it easy to camouflage with the surrounding ice and snow. His right leg is frozen, following the convention of frozen limbs within the hunter tribes. Icepaw has a purple wound on the right side of his eye and a tattooed, bare chest. He wears a belt over his waist for plugging CHI and has a kilt with chainmail-like pattern.

Icepaw is a reckless daredevil, roaring into battle on the Claw Driller’s Blaster Bike. His favorite tactic is to drive in circles around a target, until the enemy is thoroughly dizzy and confused. Icepaw frequently acts as a scout for the Ice Bears, because he is fast enough to check things out and fierce enough to fight his way out of an ambush. Icepaw never talks, but it’s said you can tell his mood by looking into his icy eyes. Few have the courage to do that, though.

From 'Bearing the Cold'

Icepaw is an extremely rare kind of Ice Bear. In combat he relies not on strength, but on speed. He roars into battle on the Claw Driller’s Blaster Bike and defeats his enemies by speeding around and around them – making them dizzy. It is not that he could not get off his bike and knock them out cold; he just thinks the other way is more elegant. An elegant Ice Bear, now you have heard it all! Icepaw is always at the very front, first one into battle and first one out. Not because he runs away, but because he is the scout of the tribe. He is incredibly hard to capture. Even if you ambush him, he can fight himself out of almost any attack. If you did catch him, you couldn’t get much out of him anyway. He never utters a single word, but you can tell what mood he is in by looking into his eyes. If you dare…

Icepaw is a member of the Ice Bear Tribe, one of the most powerful tribes in Chima. When Sir Fangar resurrected the other Hunters, he left the Ice Bears in stasis.

When Sir Fangar demanded that the Vultures free the Ice Bears at the end of the episode, the normal Bears began to awake. 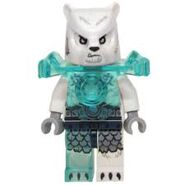 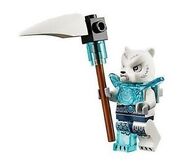 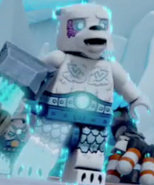 Icepaw from the TV series 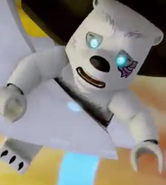 Fanart by Messier8769 on the Wiki!
view · talk · edit Legends of Chima Minifigures
Community content is available under CC-BY-SA unless otherwise noted.
Advertisement