Alive (Reformed)
The Ice Hunters are a group of ancient tribes with ice-based powers due to having been frozen in it for so long. According to legend, the Ice Hunters were Tribes that the Phoenix Tribe attempted to educate. Yet one individual, Sir Fangar, grew power-obsessed and led the Ice Hunters against the Phoenix. The Phoenix used a technique they called 'The Great Illumination', and destroyed the Hunters' temple by creating the Gorge of Eternal Depth. The Hunters were lost to history until the Scorpion Tribe dumped CHI down the cavern, awakening them from a thousand years of dreamless slumber.

Once they were awakened the Ice Hunters travailed across Chima freezing the land. A defense was mounted by the animals of Chima, but an Ice Shield created by the Hunters resulted in many early victories for the Ice Hunters, leading to desperate measures by the Tribes. This ended when Eris was lead into Mount Cavora by the Pheonix, and Fire CHI was discovered.

A group of Ice Hunters 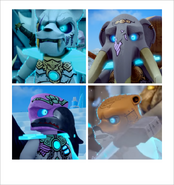 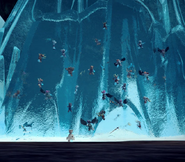