Frax is a member of the Phoenix Tribe. He is one of the pilots of the Flying Phoenix Flame Bastion along with Firox and Foltrax.

Frax's first appearance, he pilots the Flying Phoenix Flame Bastion to the Crescent along with Firox and Foltrax and attack the Hunters. Later on he goes with Fluminox and Frax as Fluminox tells the 8 heroes they proved worthy of the Fire CHI.

Fluminox, Foltrax, Firox and Frax go on a "panther hunt" in the bastion. Frax is as socked as everyone when Fluminox reveals Tormak is the panther.

The heroes fly to search for Flinx and free him. They arrive in the Gorge of Eternal Depth, and carefully fly through a small hole in the ice into the gorge.

On the way out of the gorge along with Flinx, the Hunters drop even more rocks on the bastion, but the Frax is having fun. The bastion crashes in the gorge and they get stuck inside.

The heroes are stuck at the bottom of the gorge, and they meet Lavertus. Frax shows off his fire wings along with the other phoenix as Lavertus calls them hot wings. Later on Frax participates in pushing the ice upwards with the Golden CHI. The heroes manage to push the ice and break it, and so they fly out of the gorge.

Foltrax, Firox and Frax come to help in the Lion City with the flaming bastion, but the bastion gets hit by the Hunters' ice tower. The bastion loses control and crashes, but the phoenix manage to get out. At the end of the episode, Frax returns to the sun with all of the other phoenixes. 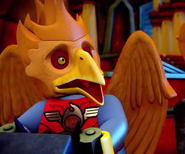