Flinx is a member of the Phoenix Tribe and received a minifigure in the summer of 2014. He also appears as a major character in Legends of Chima Season 3.

Although he’s been around for thousands of years, Flinx still acts like a kid, and that’s how he likes it. Despite efforts by his father, Fluminox, to get him to grow up and accomplish something, Flinx is happy to just hang out and have fun. Flinx is notorious for not finishing anything he starts, from big projects to tying his shoes. Part of the problem is that he already knows he is one of the most powerful beings around, and he doesn’t want to deal with the responsibility of that. Fluminox and Laval hope to help Flinx “find his spark.”[1]

Flinx is seen playing with a ball when Eris disccusses the Fire CHI supply with Fluminox and Tormak. 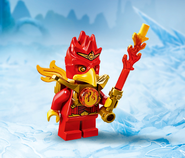 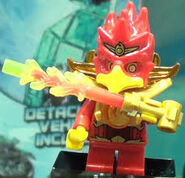 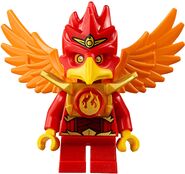 Flinx as an infant.