This article is fan-made and is not to be considered official except in regard to certain other fan works.

The majority of the Tribes of FireClan and the Beaver Tribe decided to build a large city in honor of the Phoenix's victory over the Hunters. In UmbreonzRule101's Fan Season Legends of Chima: The Last Battle, Crooler's army raided the city, hoping to annihilate the Fire Temple. 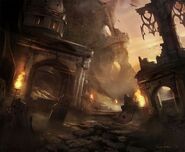 Add a photo to this gallery
Retrieved from "https://legolegendsofchima.fandom.com/wiki/Fire_City?oldid=21101"
Community content is available under CC-BY-SA unless otherwise noted.