Ewar is a member and warrior of the Eagle Tribe. Ewar is a strongly dedicated fighter, following battle plans to their exact detail. Being a perfectionist, his failure is mostly brought about from improvising a previous plan. In the TV series, Ewar is not shown to have much dialogue or screen time, with the official LEGO descriptions revealing most of his personality.

Ewar has white feather throughout his body, with a light blue muscular chest. His beak, hands and feet talons are yellow. Ewar wears gold armor, along with his simple uniform. His brow is pure white without patterning, giving him a crisp and clean look.

Ewar is brave. Ewar is strong. Ewar is true. But Ewar doesn't change direction-no matter what. He can keep a battle plan in his head from start to finish, and will follow it precisely and to great effect. But throw just one little wrench into the plans, one little miscalculation, and Ewar is completely lost.

From Legends of Chima: Character Encyclopedia:

Give eager Ewar a good battle plan and he'll practise it, learn it by heart and put it into action with precision. As long as he has a clear mission in mind, Ewar is unstoppable! But if that plan goes awry, look out - this single-minded warrior will come to a screeching halt! With strength, determination and a loyal heart, Ewar can do anything... except change course. He values thorough preparation and total dedication to the cause at hand. But being flexible? That's something for the other birds! Small and nimble, Ewar's Acro-Fighter glides in and out of tight spots on its adjustable double skis. With this vehicle, Ewar is always on the move. It's difficult to tell Ewar and Equila apart. Ewar's head has less feather patterning and he doesn't need those goofy black goggles.

Throughout the TV series, Ewar can be seen in the crowd of battles, fighting the enemies. He does not have much dialogue, however his biography stays true as he obediently follows through with plans and fights in battles. 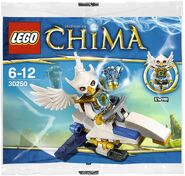