LEGO Legends of Chima Wiki
Register
Don't have an account?
Sign In
Advertisement
in: Characters, Eagle Tribe, Eagles,
and 3 more

Equila is the 'divebombing-daredevil' of the Eagle Tribe, serving as an announcer during the monthly Speedor races. Equila loves to be involved in action and target practice, whilst he dislikes peace and quiet. His muscular body is similar to other warriors within his tribe, along with white wings and gold armor. Equila has unique, black-rimmed goggles, which help him see clearly from great heights and fix his 'steely-gaze' to a target. Equila is generally extroverted in nature, being enthusiastic to commentate on the Speedor races loudly, along with some cheesy puns.

Equila is the Eagles' flying "ace" and loves to dive bomb enemies, whether in play or in battle. Equila flies an Eagle jet, a powerful feathered master of the skies, and takes great pains to keep the coveted jet in excellent repair. When not flying, Equila is the proud guardian of the mighty Eglaxxor, the first royal weapon of the Eagle tribe.

(from Legends of Chima: Character Encyclopedia)

Guardsman Equila is known for his skill in flying and his amazing aim when targeting enemies from above. On Market Days, Equila sometimes acts as the announcer for Speedor races. Ready, set, go! He's a fierce fighter who can always be found thick in battle! Equila has special responsibility for the Eagles' most precious weapon, the Eglaxxor. It's his job to make sure it stays safe and out of enemy hands. As an Eagle guard, it is Equila's job to be strong, smart and brave - and he excels at it. He is always ready for a high-flying adventure - so when the Eagles are under attack, he'll take it to the skies with a flap of his powerful wings, take aim and give his best shot for Chima!

Equila's first appearance shows him spring into the role of announcer, commentating all the events of the Speedor race.

Equila is seen fighting against the army of flying wolves on Bellow Plants, using his weapons. Later in the episode, Equila is in the Eagle Spire's library, screaming with Ewald and an Eagle Warrior after their spire nearly becomes toppled by the Crocodile Tribe tanks and Wolf Tribe tanks. After the attack is over, Equila cheers along with his allies and the wolves, over their resolution.

Equila once again announces and commentates on the race, as well as declaring Dom de la Woosh's return and asking him questions. As ShadoWind wins the race, Equila disregards him by remarking, "but it's not Dom de la Woosh, so do we really care?". Equila then attempts to interview the quiet winner, giving him the name "ShadoWind", as he is "Quick as the wind and as mysterious as a shadow".

Equila commentates the race and once again announces ShadoWind's victory. As fights break out within the crowd, Crawley insults the eagles to Eglor, "I can't stand that Eagle announcer and you look just like him," referring to Equila.

Throughout the Crawlers attacks, Equila attempts to vanquish the Black Cloud along with the other tribes of Chima. During the Ice Hunters attack, Equila joins forces with the Fire Tribes as an Eagle tribe member, to restore Chima from the frozen landscape. After the successful illumination, Equila celebrates with the others over the peaceful Chima. 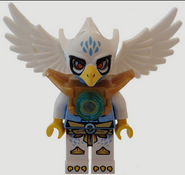 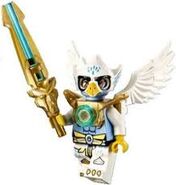 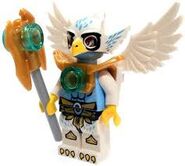 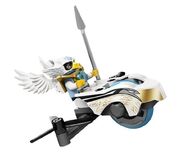 Equila on his Speedor, with a Jaba 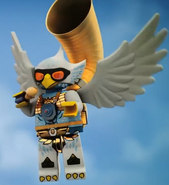 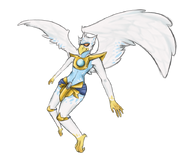