LEGO Legends of Chima Wiki
Register
Don't have an account?
Sign In
Advertisement
in: Characters, Eagles, Heroes,
and 2 more

Eglor is a highly intelligent warrior of the Eagle Tribe. Being the master of projectiles, Eglor makes most of the weapons within his tribe, usually as a result of his new experiments. Eglor loves to solve complex math and science problems, which often take long. He aims to keep his attacks precise, backed with calculations.

Eglor has dark blue feathers covering his body, different to most of his tribe. He wears silver armor, with his body covered in silver buckles for strapping into his newest contraption or attaching handy gadgets. Eglor's wings are white and has a yellow beak, hands and feet talons. He has a monocle in his right eye that he wears at times to bring targets into view or magnify tiny calculations.

A master of ballistics and primitive rocketry, Eglor is the Eagle's "gadgetbird". If given enough time, Eglor can calculate the exact speed and trajectory needed to launch a pebble halfway across Chima so it completly incapacitates its target. In his feathery claws, the smallest twig can have the explosive impact of a missile. The only problem is: his areonautical calculations take so long that the battle is usually over by the time he fires his stick-and-stone missiles. Most of the time his "deadly"  assualt lands on a completely empty battlefield, long since cleared of opponents. He doesn't have a calculator either, so equations are sprawled halfway across Eagle Mountain with chalk. The other Eagles most warily tiptoe around his scribbles lest they erase some of them and cause a miscalculation that makes his missiles radically misfire. That happens more often than the Eagles like to admit.

From Legends of Chima: Character Encyclopedia:

With Eglor's precisely calculated launches, sticks and stones can hurt your bones - and your toughest tanks, too! Eglor can figure out the right angle and speed to make simple weapons cause major damage. If only the enemy would stay put until the calculations were complete... His dark blue feathers are unique in his tribe, but there are many qualities Eglor shares with his fellow Eagles, such as intelligence, an analytical mind and a willingness to fight for the good of Chima. It's not just the missiles that Eglor can make soar; with a well-placed ramp and some clever calculations, Eglor can make his winged Speedor catch some air too! Eglor's equations are long - literally. Written on the ground in chalk, they can wind all the way around an entire mountain!

Eglor is first seen in this episode, playing noughts and crosses by himself on the Eagle Mountain with a chalk piece. This references his biography from Lego.com, how Eglor similarly uses chalk on Eagle Mountain for his calculations. He stops playing goes with his tribe on Eagle jets to fight the Ravens, Crocodiles and Wolves. Eglor then joins all the warriors to bow down to the Lion Legend Beast as it enters.

Eglor is seen collecting CHI from the distribution at the Lion CHI temple. He later greets Gorzan and detours left from the 'flower preservation zone' along with Ewald.

Eglor is seen at an Eagle stall with Ewald and another Eagle tribe member.

Eglor is the first to see the flying wolves through his weather teller. He helps his tribe battle the wolves and cheers in the end when a resolution is reached.

Eglor observes the Hundred Year Moon through his weather teller, then informs the lions regarding its implications on wolves.

Eglor accompanies the other Eagles to stop the Gorillas from their revengeful rampage against the Crocodiles.

Due to Furty's tricks, Eglor quarrels and fights amongst the crowd with Crawley in the Speedor competition.

Eglor and the other Eagles help deliver CHI to the good tribes of Chima on their jets. After the Wolves ambush them, Eglor ejects his escape pod, then Laval saves him.

When the wolves ambush the Lions, Eglor and other Eagles come to the rescue.

Throughout the Crawlers attacks, Eglor attempts to vanquish the Black Cloud along with the other tribes of Chima. Eglor was among the first people to know the story of the Phoenixes, however he dismisses it as a completely ridiculous tale of fiction in A Completely Ridiculous Tale of Fire and places the book under fiction. During the Ice Hunters attack, Equila joins forces with the Fire Tribes as an Eagle tribe member, to restore Chima from the frozen landscape. After the successful illumination, Equila celebrates with the others over the peaceful Chima.

Eglor peering through his 'weather teller' 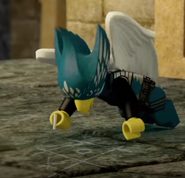 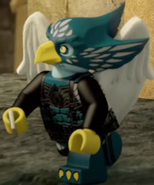 Eglor with a Chalk Piece