Crug is Cragger's lead Thug. He’s big, strong, and blindly obedient. He never questions his orders. He just plows ahead with whatever insane task Cragger requests of him. Despite his volatile and dangerous nature, he sleeps with a stuffed Teddy-Bear-like frog he calls, “Mr. FlipperLovey.”

Crug is the blacksmith of the Crocodile Tribe and is "an expert at making weapons from the metals and rocks found in and around the swamps", according to the Legends of Chima: Character Encyclopedia. He has a metal jaw which makes his jawline a "threatening sight". Crug's favourite weapon is the Slugga (a blaster), which is named after his favourite snack.

His scales are unusually dark brown, which allow Crug to camouflage with the dirtiest of swamp mud.

Crug frozen by the Ice Hunters 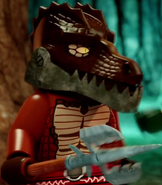 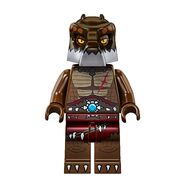 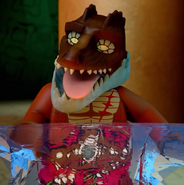 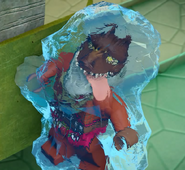