Crooler is the princess of the Crocodile Tribe and the primary antagonist of season one, along with Cragger (her twin brother), in the Legends Of Chima TV series. She is exclusive to the set 70006 Cragger's Command Ship.

Hatched just seconds after Cragger, (Despite that not being true, in one of the episodes of the TV show Crooler explains her past to Lagravis, as she should have ruled the tribe as she was born seconds before Cragger) Crooler is the Crocodile Prince's ambitious and conniving twin sister. She is constantly goading her brother on and forcing him to take all the risks, while she seeks to enjoy the rewards of his success or mock him relentlessly when he fails. Some creatures see her as the REAL authority in the Crocodile tribe, which is fine with her. She's happy to have the power, without any of the annoying trivialities and decision-making of official leadership. She doesn't exactly want to overthrow Cragger as much as she wants to manipulate him for her own benefits. She is very good at pushing his buttons and pulling his strings. She knows all his weaknesses and insecurities and constantly plays on them in order to accomplish her own goals and self-aggrandizement. She is truly the most cruel of all the Crocodiles.

Crooler and Cragger in the TV series. 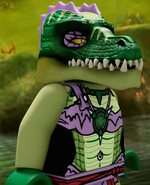