LEGO Legends of Chima Wiki
Register
Don't have an account?
Sign In
Advertisement
in: Characters, Heroes, Villains,
and 5 more

(Do not edit - from LEGO.com)
Crawley is another hench-Croc. Crawley is wiry, nervous and quick. He uses his tail like a super-powered whip – pounding, tripping, and trapping opponents with its razor-sharp scales. Crug attacks with big, punishing wallops. Crawley wears you down with a hundred little stings. Between the Crawley and Crug, they are Cragger’s most formidable foot soldiers.[1]

Crawley has spent all his life in the Crocodile tribe. He was most likely a soldier in the tribe or a hunter, and also certainly serving King Crominus. During the Civil War, he began to work with Cragger during his rulership. Becoming one of his guards (alongside Crug) and fighting for him or piloting his command ship.

After the war, he resumed his previous lifestyle.

Crawley is a typical crocodile, with a normal scale-color and casual attire. He most likely once wore a shirt. Although during his life in the swamps, it was later shredded into a small cloth over the left side of his chest. Leaving the rest of that area bare. He has a large necklace with a skeletal CHI-holder. And a few teeth have been wedged into some loose scales. Despite being labeled as a weaker member of the crocs. Crawley is quite muscular. For leggings, most of Crawley's lower body is showing. His legs have the same printing a Cragger's, a diminutive ragged belt-like loincloth adorned with sharp fangs tied to a string. And a few small white ropes hanging from the left side of the belt.

In the TV show, Crawley's legs looking completely different from that of his minifigure form. As rather than a loincloth, he is clad in a few red wraps on his waist and across the center of his abdomen, this is held together by a belt-buckle of bones. Some of his abdomen scales are showing from behind his wraps. And the most distinguishing part being the massive fish-bone were the ropes should be. 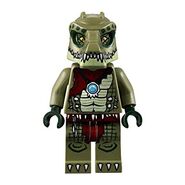