LEGO Legends of Chima Wiki
Register
Don't have an account?
Sign In
Advertisement
in: Out of date articles, Locations, Chima
English

Chima is the main setting of the Legends of Chima theme. Its landscape is primarily covered in forests, jungles, mountains and swamps. It's main Area is inhabited by twelve species of anthropomorphic animals: Lions, Eagles, Gorillas, Crocodiles, Wolves, Bears, Rhinos, Ravens, Skunks, Foxes, Beavers, and Peacocks. In the outlands there Are also 3 other tribes: the Scorpions, Bats, and the Spiders. Former inhabitants also include: Saber-Tooth Tigers, Mammoths, Vultures, Phoenixs, and the Tunnel Cats. A key feature of Chima is its floating mountain, Mount Cavora, which produces CHI, a mystical and powerful element that is the life force of Mount Cavora. Chima is dependent on Chi, when one tribe has too much or too little chi there will be earthquakes and other natural disasters until it's balanced.

The land of Chima is ringed by a rim of dense, hazardous jungle known as the Outlands. The actual continent of Chima itself is a massive, floating landmass directly above a super-sized environment.

Chima has its own written language of characters that sound out words. Most information about this is unknown but it has appeared in several episodes. 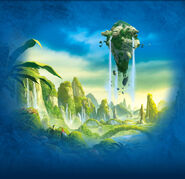 Chima and the world below