LEGO Legends of Chima Wiki
Register
Don't have an account?
Sign In
Advertisement
in: Dark tribes, Tribes, Villains,
and 2 more

Regular bats from the Outlands

Alive
The Bat Tribe is one of the Outland tribes from early 2014. They are part of the Crawlers; an alliance with the Spider Tribe and Scorpion Tribe, to steal all of the CHI from Chima. Most were presumed dead or trapped under rubble after the events of episode 26. However, episode 27 and two webisodes confirmed that there are survivors. After the events of the Season 3 finale, a webisode showed that the Bats have been integrated into Chima without issue due to the Great Illumination.

Much like the other Crawlers, the bat tribe was "created" after Laval accidentally dropped CHI down The Gorge of Eternal Depth, causing regular bats to become anthropomorphic bats. The has not been any introduced Bat Legend Beast in the series. These bats originate and live in the outlands.

Within the crawlers, "the low-ranking Bats bulk up the vile and dangerous mass", as described by the Legends of Chima: Character Encyclopedia. This low-ranking is due to the bat tribe being considered "the weakest and dumbest of all the Outland Tribes".

The bats have a very sensitive sense of hearing, allowing them to listen to sounds from a long distance away. This is also their major weakness, as high sounds can cause the bat tribe to be startled and faint. This was demonstrated when Rogon sharpens his rock very loudly in the webisode Horn to be Wild.

As all Bats have the natural ability to spew black smog from their wings, Scorm took advantage of this by arranging all of the Bats to fly over Chima, spewing smog that would form a massive black cloud, hiding their true identities from those below. Later, following the revelation of the Dark Tribes' existence, the Bats largely ceased using this tactic, instead flying normally now that their ruse had been discovered. 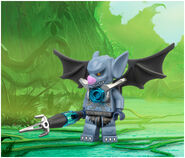 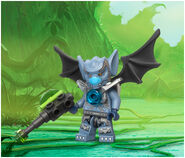 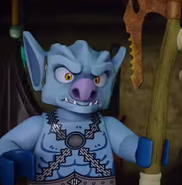