Fly into combat with Fluminox – the Phoenix tribe’s agile leader transformed with CHI power into a magnificent buildable warrior! Flap the wings to soar into the sky and launch an aerial attack with the awesome firing flame crossbow. Adjust FLUMINOX’s super-flexible limbs to create a variety of fearsome battle poses, and outwit enemy tribes before they can grab the valuable CHI from his chestplate. 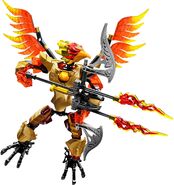