Battle for the CHI with Eris and Rogon at Spinlyn’s Cavern!

Spinlyn, the Spider Queen, has crawled back to her creepy Cavern with the CHI. Now the massive 6-legged spider is using the winch to lower to the ground and patrol the lair. Head into spider territory with Eris and Rogon on his powerful rhino bike. Fire the catapult and evade Spinlyn’s webs and poison shooters and grab back the golden CHI. Act fast before the enormous spider blows out the prison’s shooting web to send Eris, leader of the Eagle tribe, flying! Includes 3 minifigures with weapons: Spinlyn, Rogon and Eris in her new armor. 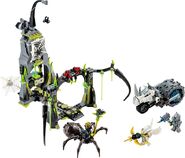 Add a photo to this gallery
Retrieved from "https://legolegendsofchima.fandom.com/wiki/70133_Spinlyn%27s_Cavern?oldid=19734"
Community content is available under CC-BY-SA unless otherwise noted.