The Lion CHI Temple is a set released in summer 2013.

In the TV Series

Restore peace to Chima in a battle at The Lion CHI Temple!

An epic battle for the CHI has begun at the majestic Lion CHI Temple. Cragger, Crawley and Razar are battling for their tribes and trying to reach the sacred CHI orb rising high above the temple. Help the Lion and Eagle tribes to fight everyone off and restore balance to Chima once again! Slam the lion gate shut and send Cragger plummeting into the pit. Then release the hidden lion claw bikes to intercept Crawley’s reptile raider. Deploy the agile eagle drone fighter to repel Razar’s airborne assault or aim and fire the rotating tower cannon. Includes 7 minifigures with weapons: Lagravis, Laval, Longtooth, Ewald, Cragger, Crawley and Razar. 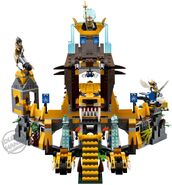 The CHI Temple as shown in the TV Series.