Rescue G’Loona from the Raven tribe with Gorzan’s Gorilla Striker!

Stomp through the jungle and rescue G’Loona in Gorzan’s Gorilla Striker! Find Rizzo in his raven nest tower and launch the chest-mounted flick missiles! Then fire the shoulder-mounted banana shooter. Watch out for Rizzo’s CHI weapons and fruit-slinging catapult! Use the Gorilla Striker’s mighty swinging arms to crash down on Rizzo and send him flying! Includes 4 minifigures with weapons: Gorzan, Grumlo, G’Loona and Rizzo.

Ask any crocodile or wolf about the Gorilla Striker and the word they will likely use is “unfair.” Gorillas are already some of the most powerful beings on Chima. Add a gorilla to a huge, armored vehicle with shoulder-mounted banana shooters and an array of missiles, and you are dealing with an unstoppable force. Although gorillas are peaceful at heart, they can do plenty of damage in a Gorilla Striker without even trying. 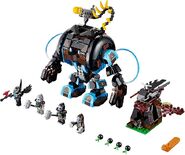 70008
Community content is available under CC-BY-SA unless otherwise noted.
Advertisement