LEGO Legends of Chima Wiki
Register
Don't have an account?
Sign In
Advertisement
in: Sets, 2013 Sets, Crocodile Tribe,
and 3 more

The ultimate swamp battle is on. Leonidas and Lennox are making a jet-bike escape with the Croc tribe’s CHI, but it takes more than that to outsmart croc prince Cragger. Fire up Cragger's Command Ship and go after them! Activate the huge snapping mouth, swipe the croc tail and fire the CHI-powered missiles! Call in their Raven ally Rawzom to track them from the air or to swoop down from above and catch those CHI-nabbing cats! Then, deploy the stealthy mini boats and high-flying croc helicopter to stop them from ever leaving the swamp. Includes 6 minifigures with assorted weapons.

Enter the swamp at your own risk. Cragger’s Command Ship sails in these murky waters, equipped with snapping jaws at the bow, a powerful tail at the stern, and CHI-powered missiles. Pilots of speedier boats might think they have a chance to get away, but that’s a big mistake – Cragger can launch mini-boats and a helicopter to pursue enemies. The sight of the massive, armored crocodile ship is enough to scare most trespassers out of the swamp long before they can make trouble. 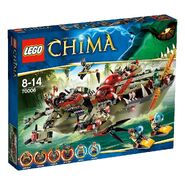 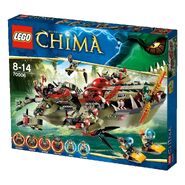 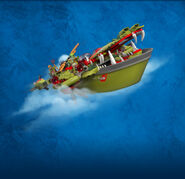