70005 Laval's Royal Fighter is a LEGO Legends of Chima set that was released in January 2013.

The Royal Fighter makes occasional appearances in the show, however, its spotlight was The Joy Ride, where Laval and Eris took it for a tour across Chima. In the end, the tank was wrecked, but fixed by the Beavers with some modifications. These including special doors and wings.

Patrol the rugged roads of Chima with Laval’s Royal Fighter! Climb with the huge 4-wheel-drive rubber tracks and roll fearlessly into battle with the mighty lion claws and teeth, and hidden mission map! That sneak Crawley won’t stand a chance when he goes after the Lion tribe’s CHI! Defend it with the Royal Fighter’s mighty CHI-powered cannon tower! Includes 3 minifigures: Laval, Longtooth and Crawley with assorted weapons. 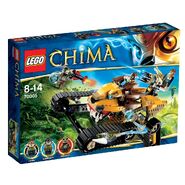 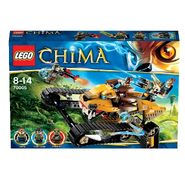