Track down the CHI in the all-terrain Pack Tracker!

Team up to hunt down Equila and take the CHI in the awesome all-terrain Pack Tracker! Lead the pack and race over even the roughest terrain with amazing wolf detailing, huge clawed wheels, biting jaws and a wolf shooter! Use the working suspension and functioning rear winch to pull the wolf truck out of trouble as Wakz and Winzar track Equila to claim the CHI for their tribe! Includes 3 minifigures with assorted weapons.

Bulky and overpowered, the Wolf Pack Tracker is used in lightning raids to steal CHI from other tribes – usually the Eagles. Toothed wheels cut their way through the jungle, and provide four-wheel stability on even the roughest terrain. Afterburners not only add to its already impressive power, but just look cool, and make the vehicle roar like a Wolf. The cannon is used to open up otherwise blocked routes of escape, but sometimes Wakz gets stuck; that’s when the rear winch comes in handy to pull him out of trouble. 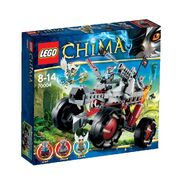 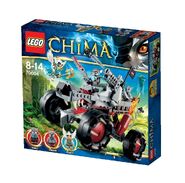 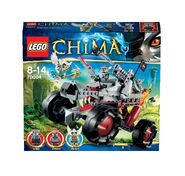