The Eagle Interceptor itself makes many appearances in the TV Series, appearing as the Eagles' main form of transport and Sky Fighter. They are most visible in episodes 11, 12, and 15, where they are used for transport and air-based combat. The escape pods are also frequently used like the Interceptors themselves.

Launch an eagle-powered attack to recover the CHI!

Alert the Eagle tribe! Razar and Rizzo have the Eagle tribe’s CHI and are escaping on the winged raven glider! Launch Eris’ Eagle Interceptor and go after those bird bandits! Use its realistic beak, poseable wings and legs, grabbing talons and tail to launch an aerial counterattack! Engage the cool attack pose and fire the missiles to bring these bandits down or capture them and throw them in the onboard prison! Then deploy the eject function to fly off and fight another day. Includes 3 minifigures and assorted weapons.

CHI thieves never see Eris drop from the sky on her Interceptor until it’s too late. Protected in the beak-like cockpit, Eris powers this Eagle-shaped cruiser wherever it’s needed. Razor-sharp talons can shred enemy vehicles or gracefully retrieve stolen CHI, and missiles discourage enemies. A powerful jet engine mounted atop the vehicle can send this defensive flyer screaming through the skies of CHIMA at very high speed, and wing feathers make the entire craft very nimble in the air. It’s faster than just about anything in the entire world. 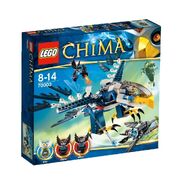 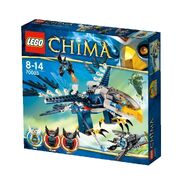 The Eagle Interceptor in set form. 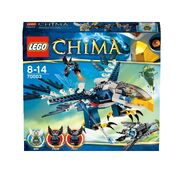 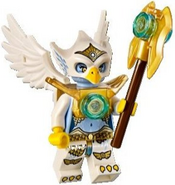 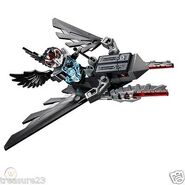