70002 Lennox' Lion Attack is a LEGO Legends of Chima set that was released in January 2013.

Crug is after the CHI powering the mighty Lion Attack vehicle. Catch him with the all-wheel drive then help brave Lennox to deploy the big claw attack. Load up the rapid-fire disc shooter and send that CHI-swiping scavenger back to the swamp where he came from! Includes 2 minifigures and a weapon.

With so many other tribes trying to swipe each others’ CHI, the Lions need a fast, powerful defensive vehicle. Lennox drives the Lions’ best defense, the Attack Vehicle, which has missiles as well as discs that can both rapid-fire to stop an enemy in its tracks. The intimidating claws at front can disable other vehicles, and its superior suspension provides not only access to steep terrain, but a nice smooth ride for Lennox. Its wide stance means it’s extremely stable, allowing Lennox to take rough trails to cut off CHI thieves. 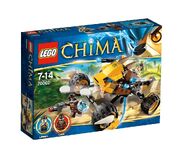