Protect the CHI with Razcal’s Glider!

Soar high above the mystical world of Chima in Razcal’s Glider to help Razcal guard the CHI. Fend off other tribes with the Raven Glider’s beak and grabbing claws, or capture them with the chain. Protect the Raven tribe’s CHI! Includes Razcal minifigure and a buildable weapon.

Razcal isn’t just an accountant – he’s an accomplished pilot, and he is responsible for one of the Raven tribe’s precious gliders. This silent glider is fast and extremely maneuverable, letting Razcal swoop down on unsuspecting targets and snatch them with the glider’s powerful claws. Its wings can be spread wide for gliding, or swept back for blazing fast dives, and a chain at the back can tangle pursuers long enough for Razcal to escape – or snatch them up, if Razcal is in a playful mood. Other tribes complain the glider is used for stealing their stuff, but the Ravens claim they only use it to defend their CHI. They find it strange nobody believes them. 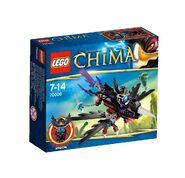 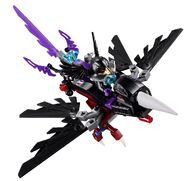